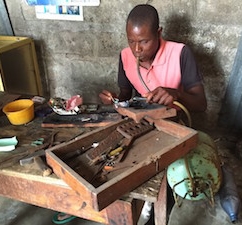 Thiès, Senegal—Imagine trying to use a handful of sand instead of sandpaper at the bench, or riding a bike half a day in blistering hot sun to borrow just one saw blade.  Try rigging up a polishing machine from the motor of an old refrigerator. Or working when "blowtorch" literally means what it says: powering a soldering torch by blowing through a tube that goes through a container of gasoline to create your flame. (Left: Dossou Mod'se of Cotonou, Bénin, has devised a soldering system involving a tube that he holds to his mouth while the other end goes into a container with gasoline. The fumes and air mix and come up through the torch to make a flame. Image: Rio Grande)

For artisan jewelers in West Africa, this is a normal day's work. Exquisite jewelry is made with tools that are resourcefully cobbled together. Having a single saw blade of one’s own is an achievement; having a full package of toothy blades is untold, life-changing riches.

All the while jewelers in North America routinely sit in workshops cluttered with tools they rarely use.

The discrepancy is what inspired two jewelers, Matthieu Cheminée, a French Canadian, and Tim McCreight, an American, to found the Toolbox Initiative in 2014. The nonprofit, supported by Albuquerque, NM-based tool supplier Rio Grande, collects both used tools and new supplies on this side of the Atlantic, then distributes them to resource-strapped jewelers in West African countries such as Senegal, Burkina Faso and Togo. 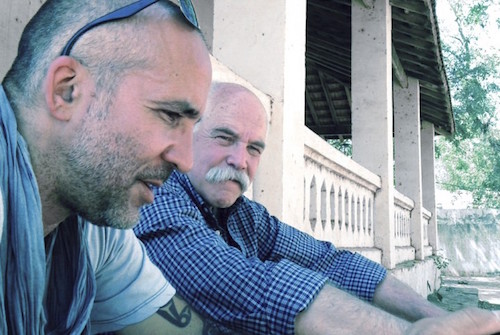 The two began making regular trips to West Africa together a few years ago, carrying 50 pounds of tools at a time. They focus filling a suitcase with small, frequently used items like files, pliers, saws, tweezers, ring clamps, and sandpaper. On the ground, the two distribute the tools among the local artisans, but never randomly. They spend a little bit of time visiting each artisan, observing their specialty, and then presenting the appropriate tools hand to hand. For instance, McCreight and Cheminée met a man who specializes in gold filigree. He had made himself a draw plate by punching holes in a piece of old metal. The resulting jewelry was beautiful and delicate, but the possibilities for him grew exponentially when the two reached into their bag and handed him a wire draw with many more size holes, donated by a jeweler that didn’t need it.

When the two arrive in a village and introduce themselves as jewelers, it’s like an immediate brotherhood with the African artisans. Love of the craft bridges any language barrier (though French-speaking Cheminée has an advantage as French is also the official language through much of West Africa.) 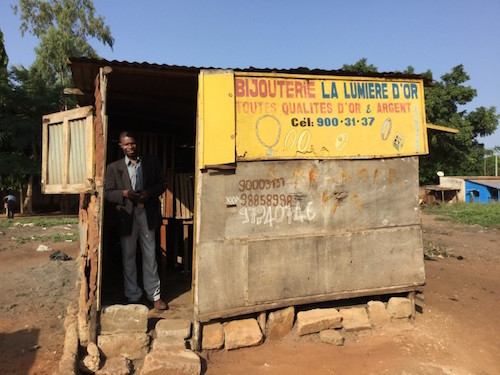 The workshop of Amededjisso Marcelin in Lomé, Togo, is made of bamboo, recycled wood and metal.

But the two couldn’t do it alone. West Africa is roughly two-thirds the size of the United States, encompassing 18 countries and countless cultural and artistic traditions. A sister program, Toolbox Travel, now coordinates with other volunteers who are interested in making the trip as well. So far, all of the Toolbox Initiative volunteers have been jewelers themselves.

On one of their first visits, McCreight and Cheminée set off on foot in Dakar, Senegal. They came to a tiny jewelry shop, barely larger than a phone booth. The jeweler had a hammer, a file, and a block of wood for soldering on. The pair ran back to their apartment and grabbed a selection of tools for him. Speechless, he just stared. The pair left, thinking they'd made a terrible faux pas and that maybe this idea wasn't going to work the way they thought.

“Oh, no!" their landlady reassured them back at their lodging. "He will get up many times in the night and just touch the tools, just to believe it really happened and they're really his!" she said. 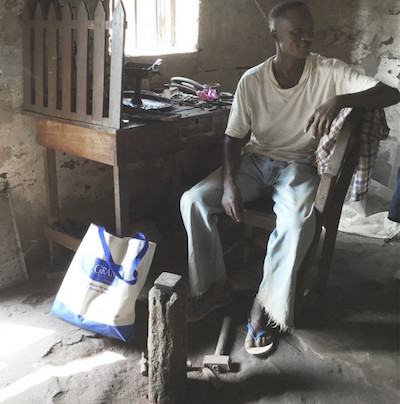 Robert Hadzra is a jeweler and farmer in Tsévié, Togo. He farms a field of corn and manioc; there is very little work for him as a jeweler in Tsévié except for the Friday market, when people from surrounding villages come to shop.​ Image: Rio Grande 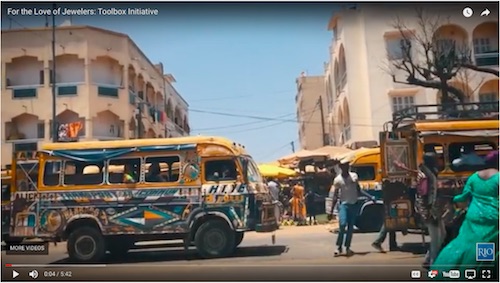 Click here or on the image above to watch a video of the Toolbox Initiative in action. Warning: you may be inspired to clean your workbench immediately and pack up some unused tools to send to West Africa!

Which, of course, brings up the next goal: teaching, sharing, and learning. The volunteers often learn as much or more than they themselves can teach as they sit side-by-side with the African jewelers. But in all of West Africa, there is only one jewelry-making school, so the Toolbox Initiative’s next goal is to create a permanent workshop facility—to be called Keur Toolbox—in downtown Dakar, Senegal. “Keur” is the word for “house” or “home” in Wolof, an indigenous West African language.

“I like that title because it’s us and them,” McCreight says. “It’s the Wolof and the English language brought together in the same way that our cultures are being brought together.” The new home of the Toolbox Initiative will host workshops by both African and Western jewelers, while providing a physical address for equipment (such as rolling mills) that won’t fit in the luggage compartment of an airplane.