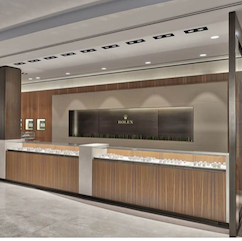 Chicago, IL—C.D. Peacock, one of America’s oldest and most venerated luxury jewelers, has been accused by a former employee of selling Rolex, Patek Philippe, and potentially other luxury watches and jewelry directly to gray market resellers. If true, it would be a major black eye for the retailer, which has been in business since 1837, is the oldest retailer in Chicago, and even survived the Great Chicago Fire. Image: A Rolex counter at C.D. Peacock.

Its customer list reads like a "who's who" of Chicago and Illinois citizens as well as internationally famous athletes, entertainers, and other celebrities. Just a few include George M. Pullman (inventor of the sleeping rail car), Marshall Field (of department store fame), First Lady Mary Todd Lincoln, and the Rolling Stones' Mick Jagger.

Charles Daniel Peacock, son of founder Elijah Peacock, changed the store's name to C.D.Peacock in 1889. The Peacock family owned the business for another 80 years, selling to Dayton-Hudson (now Target Corp.) in 1969. Men's apparel magnate Seymour Holtzman, its current owner, acquired it in 1993. Although the original downtown flagship closed, the jeweler has three stores in affluent Chicago suburbs and is an authorized dealer for both Rolex and Patek Philippe, as well as other top luxury watch brands like Cartier, IWC, Panerai, and luxury jewelry brands like Hearts On Fire, Roberto Coin, Mikimoto and more.

According to the lawsuit, the employee, Suzana Krajisnik, claims she was fired in December 2019 in retaliation for whistle-blowing about the gray market activities. She filed suit February 11 against the jeweler and individually against owner Seymour Holtzman, former CEO Robert Baumgardner, and three other individuals.

The suit, filed in the United States District Court for the Northern District of Illinois, is “for (1) terminating her employment in retaliation for whistleblowing and refusing to engage in flagrant illegal activity that violated state and federal law, in violation of the Illinois Whistleblower Act, 740 Ill. Comp. Stat. 174/1, et seq. (“IWA”); (2) firing her and committing common law retaliatory discharge; and (3) engaging in racketeering, in violation of the Racketeer Influenced and Corrupt Organization Act 18 U.S.C. §§ 1961 et seq,.”

The suit alleges that the store violated both its own and Rolex brand guidelines for sales associates. It says CDP’s management set a $10 million sales goal for Rolex in order to have the brand pay for a store remodel and funnel more of its high-demand models to CDP, and that a new employee—who under the store’s usual policies typically would not be allowed to sell Rolex yet—was both selling the brand and posting Rolex watches (especially “unicorn” models) on social media for sale in foreign countries.

The suit also names two other former employees who back up Krajisnik’s claim and say they too were fired for whistleblowing, one in June 2019 and the other in January 2020.

“Three employees of CDP, Plaintiff, Olga Nelson (“Nelson”), Giuseppe Di Lorenzo (“Di Lorenzo”), herein collectively referred to as the “whistleblowers or co-whistleblowers,” uncovered a Scheme of illegal activity (the “Scheme”). They discovered that the Scheme was being perpetrated by a coworker and multiple management-level employees, including the CEO, and with full knowledge of CDP owner Seymour Holtzman.

2. The heart of the Scheme was a conspiracy by the Defendants to illegally sell Rolex watches to foreign grey market resellers in order to enrich themselves. In order to further the Scheme, the Defendants conspired to violate numerous federal and state laws including but not limited to racketeering, money laundering, mail, wire, immigration, and credit card fraud, and Illinois sales tax evasion.

Tom Keevan, president of CD Peacock, says the suit is baseless and the store firmly adheres to the agreements it has with its luxury brands and always has.

In a statement to The Centurion, he said, "Recently a lawsuit was filed by a former employee who worked with CD Peacock (CDP) for 14 months before being terminated for cause. The suit’s baseless claims and false accusations will be vigorously defended. In an industry where demand far exceeds supply for generational-time pieces, we value transparency and accountability. Luxury watches are an extremely important part of our business. We follow all guidelines to preserve our brand partnerships. Our Rolex partnership has been renewed annually for 30 years. Our history and commitment to being a family-owned business aligns with Rolex’s values. CDP, led by third-generation family members, was the first licensed business in Chicago in 1837, and survived the great Chicago Fire. Our partnership is upheld by a strict customer vetting process in order to protect and respect the integrity of both brands and the industry. Generations of employee families choose to work with CDP to serve our loyal customers." 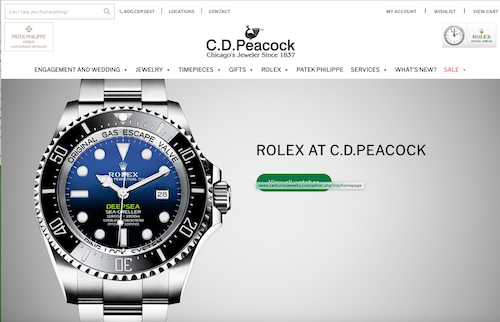 Previous article:
Jewelers Need To Prepare For Cold Weather, Too