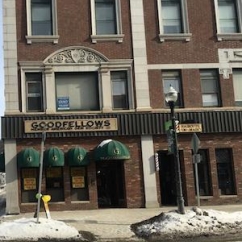 Barre, VT—It’s a refrain heard over and over in the jewelry industry: an independent jewelry store owner retires or dies, the kids have their own careers and can't take over, and another decades-old business closes its doors while generations of former customers reminisce about how they, their parents, and often even their grandparents got their wedding rings and other gifts at the store. Image: Anna Van Dine/VPR

Vermont Public Radio and the Barre Montpelier Times Argus recently profiled the closing of Goodfellows, a jewelry store that’s more than a century old and has survived multiple owners and multiple moves—until now.

The article in the Times-Argus details the history of the store thus:

“The roots of the soon-to-close jewelry store date back to the mid-1800s. It’s first incarnation is believed to be J.G. Nichols & Son, which moved into the Nichols Block, now owned occupied by Studio Place Arts, when it was built in 1885. The tiny jewelry store briefly folded in 1893, but later reopened in the same location as W.D. Kidder Jewelry. Shortly after Kidder’s death in 1910, W.H. Goodfellow bought the jewelry store and went into business with his son Burtis. W.H. Goodfellow & Son operated out of a small, single-story annex to the Nichols Block for several years before moving across the street in 1930 to occupy a sliver of the storefront that now houses Nelson Ace Hardware. The business was sold to Harold Bradbury, who shortened the name to Goodfellows Jewelers when he purchased the shop in the Eastman Block in 1936.”

From there, says the paper, the store changed hands and locations at least once more before Virgil Gentl, a diamond merchant from New York, bought it in 1961 and became the kind of beloved small-town jeweler who hand-delivered wedding rings to his customers.

The store was located on Main Street in Barre (top image) since Virgil and Rose Gentl bought it. Their son, Raymond, took over 40 years ago, but when he passed away in late 2020 his children, Andrea, a New York City photographer, and Eric, an antiques dealer, had to deal with not only the pain of losing their dad, but also the heart-wrenching decision to close his beloved jewelry store. Its last day was February 13.