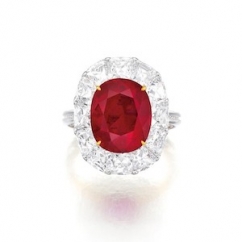 Washington, DC—In the wake of the February 1 coup in Myanmar, three Burmese gem companies face new U.S. sanctions. The White House on February 11 announced financial and economic sanctions against the Burmese military, its leaders, and their business interests, which include the three companies believed to be wholly-owned subsidiaries of a conglomerate owned or controlled by the Burmese military. The three companies are Myanmar Ruby Enterprise and Myanmar Imperial Jade Co., LTD. Image: a 6.41-ct Burmese ruby set in 18k yellow and white gold and diamonds sold for 21,955,000 HKD (US $2,831,840) at Sotheby’s Hong Kong in October 2020.

If this sounds very familiar, it should. U.S. sanctions against Myanmar began in 2008, under then-president George W. Bush, who signed the Tom Lantos Block Burmese JADE Act into law in response to human rights violations there, and effectively barred rubies, jade, or any other Burmese gems from entering the United States. The five-year act originally was set to expire in 2013, but at that time former president Barack Obama reinstated it until substantive progress in advancing democracy and human rights over the next few years led to his lifting the ban in 2016.

But in 2019, bad behavior put Burmese officials back on U.S. radar. The Treasury Department under former president Donald Trump issued new financial sanctions against senior commanders in the Myanmar military, citing two years’ worth of crimes against humanity and other human rights abuses, especially ethnic cleansing of Rohingya Muslims. Those sanctions were largely financial and didn’t include gems.

Now gems are back in the spotlight. At press time, the three companies cited are the only Burmese gem dealers impacted, but more may be added—or, if the leaders of the coup back down, president Joe Biden said even these new sanctions need not be permanent.

“Burma’s military should immediately restore power to the democratically elected government, end the state of emergency, release all those unjustly detained, and ensure peaceful protestors are not met with violence.  The results of Burma’s November 8, 2021 elections must be respected, and Parliament should be convened at the earliest opportunity,” said the White House statement.

In the meantime, a statement from the Jewelers' Vigilance Committee says, "All U.S. businesses are now prohibited from doing business with these three entities which cover much of Myanmar’s existing colored gemstone trade. The U.S. government made this policy decision because these entities are directly connected to the military leaders who undertook the coup. The covered people and business entities have now been added to the Office of Foreign Asset Control (OFAC) Specially-Designated Nationals (SDN) list.

Routinely, the JVC advises everyone in the jewelry industry to know their suppliers and ask who their suppliers deal with all the way up the supply chain, to ensure that none are doing business even indirectly with either these sanctioned companies or in general with any other entities who may be engaged in illegal or unethical practices.

Next article:
Valentine’s Day Was Strong For Better Jewelers, But Momentum Dips Slightly From Christmas