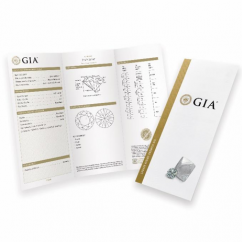 Antwerp, Belgium—A European gem laboratory has been ordered to cease using trademarks that closely resemble that of GIA (Gemological Institute of America).

Citing recognition of GIA for gemological report services and education, a Belgian court unequivocally ordered AIG Belgium, operating as American International Gemological Laboratories and Antwerp International Gemological Laboratories, to immediately cease using ‘AIG’ alone or in conjunction with other marks, or face significant penalty payments. This definitive ruling applies to the use of the now-illegitimate marks used by ‘AIG’ relating to both education and gem grading.

“The global gem and jewelry trade and consumers around the world rely on the independence of GIA’s science-based gemological reports and the industry-leading quality of GIA education,” said Jennifer Wilson, GIA general counsel and senior vice president. “When others attempt to take advantage of GIA’s reputation and global recognition to create confusion in the trade and among consumers for financial gain, we will always respond with vigor and resolve.”

In handing down its decision, the court cited AIG’s ‘attempt to sail on the success of GIA’s marks’ and imposed penalty payments for prohibited use up to €500,000. GIA’s trademarks, including ‘GIA,’ ‘Gemological Institute of America,’ the GIA seal and other logos are recognized and protected throughout the world. As part of its consumer-protection mission to ensure the public trust in gems and jewelry, the Institute vigorously pursues any person or organization who attempts to misappropriate GIA’s intellectual property and reputation.

GIA turned to the courts after several demands that AIG cease and desist in infringing on GIA’s protected marks and logos. GIA also is vigorously pursuing an adjacent case pertaining to AIG-related entities in Israel.

The appearance of the two logos was deemed by a Belgian court to be sufficiently close enough to warrant trademark infringement. Top image: A GIA grading report.