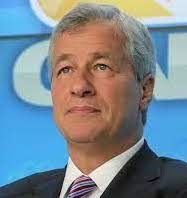 New York, NY—Bankers, economists, and precious metals experts alike say it's not government spending or inflation, but rather geopolitical and social issues that pose the biggest economic threat to the United States and the world.

Jamie Dimon (image, Wikipedia), CEO of JPMorgan Chase, says the U.S. economy is poised for major growth. In his annual letter to shareholders, he said, “I have little doubt that with excess savings, new stimulus savings, huge deficit spending, more QE, a new potential infrastructure bill, a successful vaccine and euphoria around the end of the pandemic, the U.S. economy will likely boom.” That boom could extend well into 2023.

“The permanent effect of this boom will be fully known only when we see the quality, effectiveness and sustainability of the infrastructure and other government investments. I hope there is extraordinary discipline on how all of this money is spent. Spent wisely, it will create more economic opportunity for everyone.”

While inflation is always a concern in a booming economy and both Chase’s and Wells Fargo’s experts are keeping a wary eye on it, none felt it is an immediate cause for alarm.

What is a major concern to these leading bankers, however, are the deep sociopolitical issues tearing at the fabric of the nation. On a global level, analysts at metals consultancy Valcambi Suisse say geopolitical crises such as heightened tensions in eastern Ukraine and the recent incident at a nuclear site in Iran have the potential to shoot gold prices up.

The good news around gold is that Valcambi’s analysts say such spikes are typically short term and rarely lasting. In a recent commentary in MetalsFocus, they said, “This assessment is based on how gold has often reacted to crises over the past 30-40 years. In most cases that we touch on below, gold did achieve some healthy upside, in some cases quite dramatically. However, this often proved to be a knee-jerk reaction, with prices quite often returning to pre-crisis levels in a relatively short period of time.

Dimon in his letter said, “America has faced tough times before – the Civil War, World War I, the U.S. stock market crash of 1929 and the Great Depression that followed, and World War II, among others. As recently as the late 1960s and 1970s, we struggled with the loss of the Vietnam War, political and racial injustice, recessions, inflation and the emergence of Japan as an economic power. But in each case, America’s might and resiliency strengthened our position in the world, particularly in relation to our major international competitors. This time may be different.”

Rivals such as China see an America in decline, “losing ground in technology, infrastructure and education – a nation torn and crippled by politics, as well as racial and income inequality – and a country unable to coordinate government policies (fiscal, monetary, industrial, regulatory) in any coherent way to accomplish national goals.”

Wells Fargo’s Bryson, during the annual Economic Forecast Breakfast hosted online by the Greater Reading Chamber Alliance in Reading, PA, also told the audience that racial and income inequality and the deep political divide in this nation pose the biggest threat to economic growth and stability.

Previous article:
Uneek celebrates its 25th Anniversary with the ‘It’s All About U’ Campaign