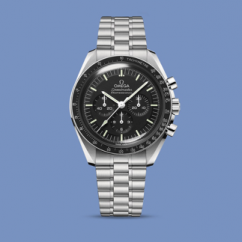 New York, NY—One of the key factors driving watch design is the ability to create a timepiece that can withstand extreme conditions and still tell time accurately. This is central to successful divers’ watches and, in the other direction, in the creation of astronauts’ watches. Image: Omega Moonwatch; via WIRED.

Watch and/or space aficionados know the most famous space watch is the Omega Speedmaster, worn by Neil Armstrong, Buzz Aldrin, etc. and, most recently, Jeff Bezos.

But, as this article in Wired magazine explains, few know the extreme tests NASA put the watch through at the start of its Gemini space program in 1961. Obviously the Omega passed, but later, following the successful Gemini missions, NASA put out another call to watchmakers in 1964 asking them to create watches for future space missions. Only Omega, Hamilton, Rolex, and Longines responded. In a back-to-the-future moment, Hamilton’s entry—a modern wristwatch instead of an old-fashioned pocket watch—was immediately disqualified, says Wired. (Think about the logistics of an astronaut suit.)

The remaining watches were put through 11 tests designed to simulate conditions in space. From the article:

The Rolex and Longines both failed at the high-temperature trials, but the Omega kept working through all 11 tests, and it was duly awarded NASA’s certification. Fitting, then, that it makes our list below of the select group of five watches connected with spacefaring adventures.

Fast forward to the 21st century where, as Bezos and Virgin’s Richard Branson demonstrated this year, space travel for civilians is on the horizon. Wired picked five watches suitable for space travel—and no, a Rolex isn’t among them.

Perhaps what’s most surprising is how affordable four of the five watches are. The Urwerk is a pricey $62,500, but both the Bulova and the Seiko are priced in the hundreds, not thousands, of dollars, in keeping with their brand missions. And the Omega and Fortis both clock in under $7,000, mere pocket change in the world of luxury watch collecting. That said, price is kind of a moot point here, since only billionaires can afford to be space tourists at this point. But think about 1921, when going to space at all was inconceivable. Maybe the time when ordinary folks can rocket to the stars is not that far off after all. In any case, at least we'll know the time is accurate when it comes.

Next article:
Gold, Silver, And Platinum Price Forecast For 2022