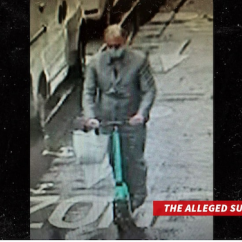 Merrick, NY—Unfortunately, as consumers emerged from lockdown throughout 2021, so did criminals. In February, a suspect was nabbed in connection with a series of jewelry store thefts in southeastern PA, southern NJ, Delaware and Maryland. In Washington state, a lowlife stole a gold necklace from a thrift store benefiting animal rescue. In March, JSA issued a report saying grab-and-run thefts were surging nationwide. And in September, a Connecticut jeweler was robbed of $145K worth of jewelry in a home invasion. Top image: A well-dressed jewel thief in Paris, France, escapes on a scooter with the loot tied in a plastic bag on the handlebars. Image, TMZ.

A luxury jeweler in Chicago got in hot water after hosting a private clinic for well-heeled customers to jump the line for COVID-19 vaccines in March, before they were otherwise eligible. The vaccine doses themselves were purloined from a hospital in an underserved part of town where residents suffered disproportionately from the pandemic. The hospital’s COO/CFO was a major client of the jeweler. 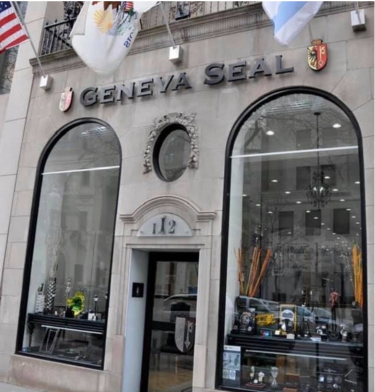 Well-heeled customers of Geneva Seal, a luxury Chicago jewelry store, were able to get COVID-19 vaccinations long before they were available to the public.

A jeweler showing a customer high-end watches at a restaurant in Beverly Hills, CA was quickly and violently relieved of those watches, along with his own Richard Mille timepiece, and another diner at the restaurant was shot in the struggle. More Richard Mille watches disappeared from a Chicago luxury automobile dealer who had them on display along with cars from Lamborghini, Bentley, and Rolls-Royce.

A Jersey City, NJ jeweler admitted lying to federal agents during an investigation into a fraud conspiracy. But Zameer Lokhandwala of Marc Samuels Jewelers, a prestige jeweler with locations in Frisco and Grapevine, TX, said “oops” when asked by federal authorities to explain a series of cash transactions over $10,000 each. Lokhandwala wasn’t being charged with a crime, but federal anti-money-laundering laws require all cash transactions over $10,000 to be reported. His attorneys said it was an innocent mistake, not a criminal intent.

A thief posing as a producer from Sony Pictures fleeced NY-based Crown Jewels Estate Jewelry out of $2.09 million worth of jewelry. James Sabatino, an imprisoned mobster from the Gambino crime family, crafted legitimate-looking insurance documents and emails asking for the loan of some jewelry for actress Jennifer Lopez to wear while filming a movie. But there was no movie, and no insurance reparation either: the jeweler’s insurer, Lloyd’s, cited a dishonest entrustment exclusion in the policy, upheld by the 1st New York Appellate Division court. Sabatino, a legendary con artist, has scammed at least 10 jewelry retailers, including Tiffany and Judith Lieber.

Santiago Mora, owner of ALKU Modern Jewelers, a retail jewelry store in Katy, TX, took a page from Nirav Modi’s book and vanished after taking cash from customers and never delivering diamond jewelry and Rolex watches they paid for. He was later found and arrested in Miami.

Meanwhile, Modi, the industry’s most famous fugitive, is still in a London jail fighting tooth and nail to avoid extradition to India. 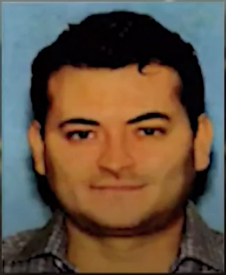 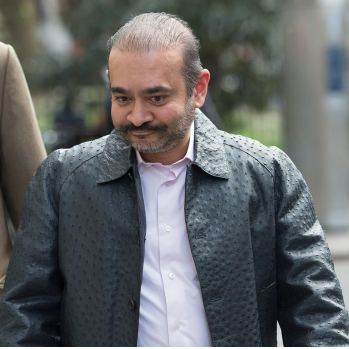 In France, even thieves are well-dressed: an armed robber who held up the high-end Chaumet boutique in Paris not only wore an elegant gray suit for the heist, but also fled the scene on a stand-up electric scooter, (top image) carrying about two million euros’ ($2.37 million) worth of stolen jewelry in a white plastic bag hanging from the handlebar. Two suspects were later apprehended by French police at a highway rest stop close to the French-German border. Most of the jewelry was recovered.

In New York City, police apprehended a suspect believed to be part of a gang called "OED" (Own Every Dollar) that targets wealthy people wearing high-end jewelry and watches. The OED gang pulled off some 12 heists and stole more than $4 million in luxury bling from patrons of top NYC restaurants like Tao and Philippe Chow.

Two female con artists posing as charity workers stole expensive Rolex watches right off the arms of about 14 older men in England. The thieves, believed to be Eastern European and pretending to be charity workers taking a survey, approached lone older men in the parking lots of exclusive golf clubs or in shopping areas near Bournemouth, Southampton, Portsmouth, and more. As of October, they were still at it.

Flash mobs of thieves were targeting high-end stores across the country in November, including jewelers.

Crimes thwarted. A Mississippi jeweler was grateful for smash-proof doors and a good security system, which helped catch two suspects believed to have robbed a nearby drugstore. And a quick-thinking jeweler in suburban Pittsburgh saved a family of shoppers from a violent gang rumble developing in the mall. Employees of Noah Gabriel & Co. Jewelers quickly rushed the family inside, locked the store, then ushered the family and store staff to a safe room at the back of the store, double-locking everyone down safely.

He said, she said. A former employee of Chicago’s storied C.D. Peacock accused the jeweler of reselling luxury watches and jewelry to a gray-market reseller. Suzana Krajisnik sued the jeweler, claiming she was fired in retaliation for whistle-blowing. Tom Keevan, president of CD Peacock, says she was fired for cause and the suit is baseless. "In an industry where demand far exceeds supply for generational-time pieces, we value transparency and accountability. Luxury watches are an extremely important part of our business,” he told The Centurion.

Tiffany and Costco continued their longstanding feud over the latter’s use of the word “Tiffany” for its four-prong diamond rings, and the former’s desire to protect its brand.

Justice served. Nicolas Shaughnessy, 22, pleaded guilty to a capital murder charge in the 2018 killing of his father, beloved AGS jeweler Theodore Shaughnessy. An accomplice, Arieon Smith, also pleaded guilty. Both men have been sentenced to 35 years in prison for the crime, and will not be eligible for parole for at least 20 years. 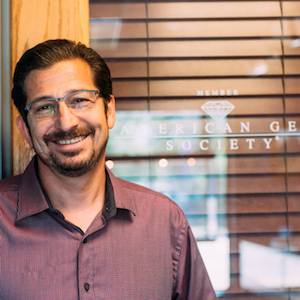 The late Ted Shaughnessy, killed by his son, was beloved around the industry and his home community.

Two brothers, Kenterius Wright, 19 and Daqarius Wright, 20, were arrested in the killing of Jamie Iverson, owner of Paul’s Jewelry in Indianola, MS.

60-year-old Lula Lakatos was convicted nine to one by a London court for the 2016 sleight-of-hand theft at high-end London jewelry store Boodles. Dressed like an innocent-looking granny, she switched $5.8 million worth of diamonds for garden pebbles before changing clothes in a pub and fleeing to France. She was sentenced to 5-1/2 years in prison. 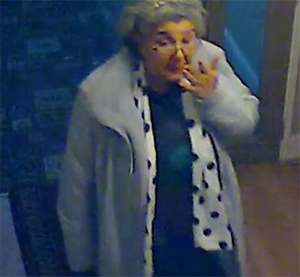 Five men who fenced stolen diamonds, including a 47th Street dealer, were sentenced to 15+ years in prison.

Finally, justice is still waiting for the woman who killed beloved PA jeweler Patrick Murphy. After a two-year delay, Megan Hall moved closer to standing trial for her crime. But in the meantime, she was featured on a Netflix documentary about incarcerated women, much to the industry’s great chagrin.

Next article:
Going To Space? You’ll Need One Of These Five Out-Of-This-World Watches