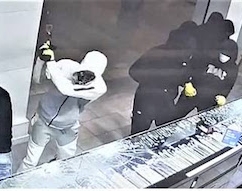 Flash mob thefts, where a large group of individuals charge into a store and make off with thousands of dollars of jewelry, electronics, handbags, and other costly merchandise, have been occurring in California for some time, but ramped up this fall. Now gangs of robbers are trying the same tactics in other states, and retailers are hard-pressed to know how to deal with it, especially if it happens during business hours.

Iceberg Diamonds of Concord, CA was hit on Monday, November 15 (image), around 7:30 p.m., while the store was open. Nine suspects rushed the jeweler, in the SunValley Mall, and “wiped out the inventory.” The Jewelers Security Alliance reported that shoppers in the mall thought they heard gunshots, but it was the sound of the thieves’ hammers breaking the showcases, and no shots were fired.

Four individuals—three in North Carolina and one in Washington state—weren’t so lucky. ABC News reports three people were shot, including a 10-year-old child, and another three suffered non-life-threatening injuries during a subsequent evacuation when gunfire broke out at Southpoint Mall in Durham, NC on Black Friday. In Tacoma, WA, gunfire broke out at the Tacoma Mall, injuring one and forcing an evacuation. Both incidents appear to be disputes between individuals known to each other.

In California, the flash mob thefts often target luxury retailers. Stores like Bottega Veneta, Louis Vuitton, Gucci, and other high-end retailers have been targeted by large gangs of roving thieves, often as many as 30 or 40 at a time. A jewelry store in Hayward, CA, was attacked by a mob of about 30.

Similarly, flash mobs attacked three Louis Vuitton stores in and around Chicago, IL, while a mob of about 30 stormed a Best Buy in Minneapolis, MN, making off with an undisclosed amount of electronic merchandise. But the mob that robbed a Nordstrom store in Walnut Creek, CA, was stunning in its sheer size and scope: about 80 individuals in 25 cars smashed through the main floor of the store and cleaned out the luxury merchandise in minutes.

According to this report, there are many unknowns about the various incidents: whether the various attacks are related or simply copycat crimes, tactics used by participants to coordinate and communicate, and how any merchandise might be fenced. Social media appears to be how the events are organized.

The Jewelers’ Security Alliance offers nine recommendations for jewelers in the event of a smash-and-grab robbery:

Next article:
Tiffany To Sell Its Most Expensive Piece Yet