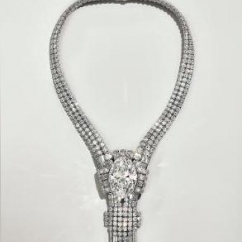 Dubai, UAE—Fittingly since its acquisition by luxury conglomerate LVMH, Tiffany & Co. on November 21 unveiled its most expensive piece of jewelry to date.

CNN reports the piece, called “The World's Fair Necklace," has 180 total carats of diamonds set in platinum. At its center is the Empire Diamond, an 80-carat D-flawless oval sourced in Botswana, cut and polished in Israel, and set in Tiffany's New York City workshop. As is standard with all Tiffany jewelry, it is guaranteed to be ethically sourced.

The Empire Diamond’s name is an homage to New York City and to the famous 1939 World’s Fair held there, where Tiffany had a display of jewelry designed in the American Art Deco style upon which it built its reputation. WWD reports the original World’s Fair necklace had a 200-carat aquamarine at its center, not a diamond, although it was surrounded by 429 diamonds.

But when Tiffany’s archivists last year came across a sketch for the original piece, they discovered it was depicted with a center diamond, not an aquamarine, says WWD. The new iteration both hews to and departs from the original idea: with 353 round brilliant stones and 224 custom-cut baguettes enhancing the Empire Diamond, it looks more like the original sketch, but has more total diamonds and, in a modern twist of versatility, the Empire in its setting can be carefully detached from the necklace and worn in an accompanying ring setting. 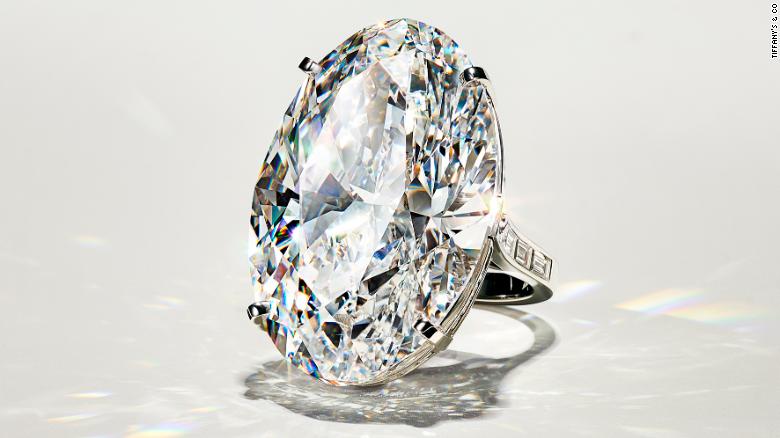 Tiffany didn’t release the price tag for the piece, but WWD says industry experts estimate its value between $20-$30 million. By contrast, the original World’s Fair necklace with the aquamarine was priced at $28,000—roughly $557,000 today.