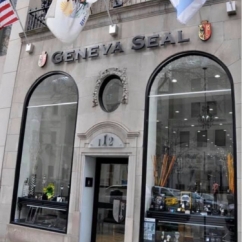 Usually when a jeweler gets hit with a raft of bad publicity, it’s around allegations of diamond switching, inflated appraisals, or similar kinds of activity. Until now, no jewelry store has been accused of helping its privileged clients jump the line to get a vaccine.

Block Club Chicago first reported the unauthorized vaccine distribution at Geneva Seal, a luxury watch and jewelry shop on Oak Street along Chicago’s Gold Coast. The vaccines themselves came from Loretto Hospital, whose now-former chief operating officer/chief financial officer Anosh Ahmed is a frequent and high-spending customer at the jewelry store, says the Block Club article. The hospital is located on Chicago’s West Side, in an underserved area far from the posh shopping district where Geneva Seal is located, or from the luxury apartments and upscale steakhouse in downtown Chicago where Ahmed also has ties and reportedly shots to well-connected individuals.

Geneva Seal held the vaccination event on March 3, says the article. The jeweler offered vaccines to customers and people who own and work at other high-end boutiques along the Gold Coast, along with their friends and family, even if those individuals did not qualify yet according to state health guidelines.

A source—who did get the shot at Geneva Seal and says she later regretted it in an attack of conscience—told Block Club that she watched “white and privileged” people going in and out of the jewelry store vaccine clinic for several hours. A second source also told Block Club that Ahmed was providing vaccines for individual well-connected friends as early as late December or early January.

The City of Chicago, meanwhile, has cut off vaccine supplies to the hospital. Its president and CEO, George Miller, also is in hot water after diverting vaccines to members of his church, 30 miles from the hospital’s at-risk community where residents have suffered disproportionately from the effects of the pandemic, reports Chicago’s CBS-2.

Medcitynews.com reports Chicago mayor Lori Lightfoot has called for an independent investigation of the hospital. From the article:

Loretto Hospital, which serves the city’s west side, needs to “come clean about every instance in which a vaccine [dose] has been committed to people that don’t fit into that west side footprint,” Lightfoot said.

“I’ve been very upfront about the fact that I’m been deeply disappointed with the way that Loretto…in my view, misappropriated precious vaccines that were intended to serve the west side community, the low-income black community, that Loretto Hospital has a mission to serve,” [Lightfoot] said.