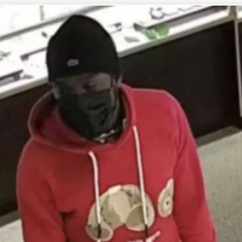 Dover, DE—Michael Larbi, 22, of Dover, DE was taken into custody last week in connection with a series of jewelry store robberies in southeastern Pennsylvania, New Jersey, and Delaware. In case anyone needed proof that cooperation leads to apprehension, the Jewelers’ Security Alliance has been tracking these events and a TV news report from Philadelphia’s NBC10 affiliate says that while investigating one of the robberies, police in Evesham Township, NJ determined that similar robberies had occurred at five other jurisdictions in New Jersey and Pennsylvania, then subsequently learned of three similar thefts in Maryland--with evidence from one of those thefts leading to a break in the cases in New Jersey and Pennsylvania.

The suspect, shown top of page, was seen wearing the same black beanie, and a watch and belt buckle (not shown) in multiple incidents. He is in custody in Delaware, awaiting extradition to New Jersey, NBC10 said.

Next article:
Retailers Only! Please Take A 2-Minute Survey Of Valentine’s Day Business