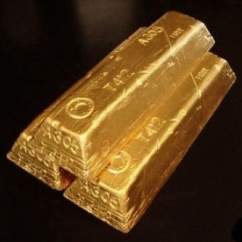 New York, NY—Gold prices blasted through the $2,000 barrier overnight, initially setting a new record of $2,021. Soon after the opening bell in New York, that had risen to $2,060 on a disappointing July jobs report from payroll processor ADP—though at this stage, already-volatile gold prices are likely to get even more so.

Investors have been flocking to gold as a safe haven asset as the global coronavirus pandemic shows no signs of abating any time soon. Ongoing geopolitical unrest is pushing the metal up as well, and the massive explosion in Beirut also helped set the new record. At press time, the cause of the blast was still unknown.

It was only five weeks ago that analysts were predicting gold to hit the once-unthinkable $2,200 mark by year’s end. Kitco.com analyst Jim Wyckoff said then that gold futures prices on the Comex were on an accelerating upward trend; at the time suggesting gold would breach $2,000 in November.

Instead, it sailed easily through that barrier overnight between August 4 and 5. Gold is up 34% since the start of the year, and are on track for the best year since 1979, said a morning report on CNBC. Meanwhile, silver prices also have shot up more than 30% year to date. Platinum, meanwhile, is less than half the price of gold: at press time, it was trading at $979 an ounce.

By the beginning of July, multiple experts were pulling out their charts, comparing data, and coming up with truly dizzying price predictions of $4,000, $5,000, and even $10,000. A few—most notably CPM’s Jeffrey Christian—urged calm and explained why those kind of stratospheric highs are not sustainable.

But if the metal hit $2,000 three full months earlier than predicted, what’s next? Gold analysts are still looking at $2,200 as the next barrier. A key factor will be the U.S. government’s stimulus package. The market already has factored in a $1 trillion package, says Kitco, but something like a $3 trillion package (or higher) could bolster a continued rise in gold prices.

Meanwhile, as people are buying more gold, there’s another issue creating a problem: where to store it. Gold bars and coins are both bulky and heavy, and jewelry can have an emotional meaning, an added complication, says a report in The New York Times.

For serious gold investors, a little safe in the basement isn’t going to cut it. And some particularly paranoid investors fear that in a massive financial meltdown, banks will close and thus a safe deposit box won’t be safe either as their gold would be trapped inside.

Luckily, options are expanding to meet the need, says the Times report. Since the 2008 financial crisis, domestic bullion storage facilities have increased more than tenfold, from about 10 to 20 to hundreds around the world. In particular, in places like Switzerland and Singapore, which are considered to be the safest spots politically.

Swiss vaults in particular tend to be expensive, but a new one that opened in London recently offers white-glove service. Its uniformed chauffeurs will show up in a Rolls Royce to pick up you and your gold, and deliver you to a supposedly-impregnable converted mansion, where it will be handed over to white-gloved custodians to store it for you in thick steel vaults. The only catch is that it’ll cost the equivalent of a few of those bars to pay for the service, and the company claims it’s only available to the world’s billionaires, says the Times.