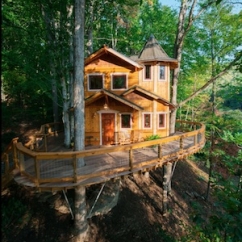 Asheville, NC—It’s ok if you call Michael Greene a tree-hugger. While you might not find him with his arms wrapped around a maple, the vacation home he built in Weaverville, NC, is nestled in a tree (actually, three trees) and its massive deck was built around the trees’ branches and trunks.

“Building a house is just like making jewelry, only bigger,” says Greene, a third-generation jeweler who joined GN Diamond after turning over his store, Wick and Greene, to fourth-generation daughter and son-in-law, Eva-Michelle and Elliott Spicer. After a brief closure for the transition, the Spicers reopened the retail business as Spicer Greene Jewelers.

But a second career on the supplier side of the industry is only part of Greene’s story: He and his wife, Eva, also have a thriving business of vacation rental properties in western North Carolina, nestled at the base of the Blue Ridge Mountains.

Before Michael and Eva even knew their daughter—who worked for US Airways as a retail trainer—was planning to come back to the store, they had begun looking for some residential investment property. They told their realtor it didn’t matter what, specifically, only that it had to be a real steal of a price. The realtor came through with a foreclosed property in bad shape. The bank had had it for three or four years and was anxious to get rid of it, says Greene. “That allowed the numbers to work. We were able to select the property, rehabilitate it, and make it into something really special.”

That something grew into Carolina Jewel, a historic house on a 40-acre property. The original house, called the Brigman-Chambers House, is on the National Register of Historic Places, says Greene. Its central part was built in 1845 and a newer addition was completed in 1880. There’s a creek that runs through the property, which also boasts a smaller two-bedroom, two bath cottage, called Crystal Creekside Cottage, and the 750-square foot treehouse with a 2,000 square foot deck.

Greene wasn’t kidding about the similarities between being a jeweler and a luxury innkeeper. “For us, it’s a really cool thing because in addition to my GN Diamond job, it still gives us the opportunity to provide a luxury experience for our guests, much like the jewelry store. We still see people for happy occasions in their lives, and they get a total luxury experience over the entire Carolina Jewel property.”

In addition to the property’s name, the various rooms are also named for gemstones. There’s Ruby Romance, Emerald Escape, and more. Quite a few gem species are indigenous to the area, says Greene, something many people don’t know. But guests who book the Greenes’ vacation properties can’t help but learn a bit about the area’s gem history while they stay. And viewers of the program will see a fair bit of jewelry, as well.

The treehouse is called Moonstone Skycastle. The deck railing, constructed in pieces, was designed to suggest the four phases of the moon, and in a nod to the region’s other indigenous moon-based claim to fame, the Treehouse Guys transformed an antique still (below) into a water feature for the deck. 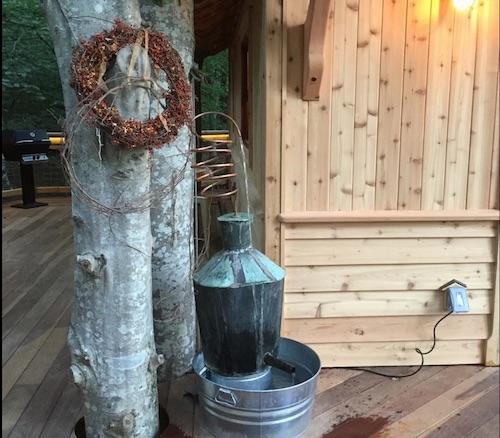 The tree house’s construction is featured on DIY’s The Treehouse Guys, Season 3, Episode 4. The entire family, Michael, Eva, Eva-Michelle, and Elliot, are featured in the program. Below, the expansive deck (2,000 square feet) was built around several trees. 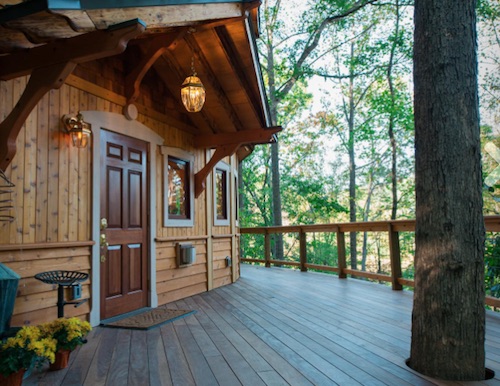 “We built it in conjunction with the Treehouse Guys,” says Greene. The episode shows the process from site selection and choosing the trees through the engineering process to keep the house stable and the trees healthy, through its completion—or, rather, what is completed enough for the TV cameras on “reveal day.” Construction began in February 2016 and as July approached, the producers said, “we have to wrap this.”

“When it was featured on TV, it wasn’t fully done. It looked done, but the bathrooms weren’t finished and we had to use drop cords to get the full lighting effect,” says Greene. It also required shoveling—not sweeping—inches of sawdust off the deck. After the house was staged for the final filming, the Greenes “collapsed for a few weeks, then went back to really finish and furnish our dream treehouse!” The house was finished in October last year, the Greenes got the certificate of occupancy in November, and welcomed its first guests by Thanksgiving. 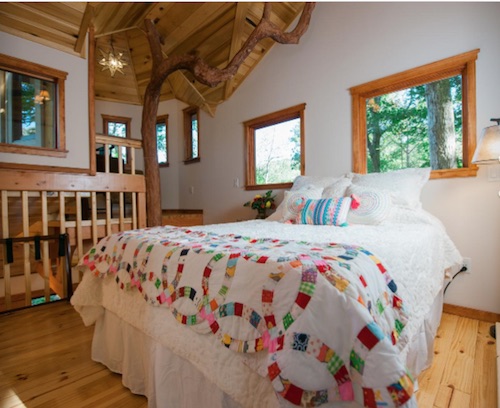 The master bedroom. The tree inside was one the Treehouse Guys found in the woods and dragged back to the house. Most of their properties feature found elements, and the guys call their nature foraging "Aisle 6."

Greene even works it into his jewelry career: if jewelers book two nights in the treehouse and buy two diamonds from GN, he gives them a third night for free. A variety of jewelers have already taken advantage of the promotion, he says. And as jewelers, he and Eva had a history of philanthropy in the community that they continue as innkeepers: they often donate vacation packages to the local symphony orchestra or March of Dimes or other organizations to auction off and raise money.

Apart from the connection of serving customers with a luxury experience at the happiest times of their lives, Greene wasn’t kidding about the similarities between creating a piece of jewelry and building a house. He and Eva did much of the renovation on the other two houses on the property as well as worked on the treehouse, calling in expertise only for some of the tasks.

“You do things the same way as a jeweler, just with different materials. You start at the beginning and think about what you’re going to do and then construct it,” he says. For example, he and Eva did the bathrooms themselves, and he is particularly proud of the luxury touches they put in, like a heated tile floor.

And, like jewelry, home construction has its frustrations. The treehouse has an outdoor shower, whose construction caused no end of headaches for Michael and Eva because the county kept adding more and more restrictions.

“The county said you can’t have an outdoor shower unless you run the drains through the septic tank. We had already built the deck and we had to go back and reverse-engineer how to run the drains.

“After it [the shower] was done they said it had to have walls on it, so we put bamboo walls on hinges. We got finished with that part and they said, ‘you have to have a roof.’” Eva told the county inspectors they were ruining her happy part, and Michael laughs now about the huge fight he and Eva had over that shower. But guests love it and it was worth it, he says. 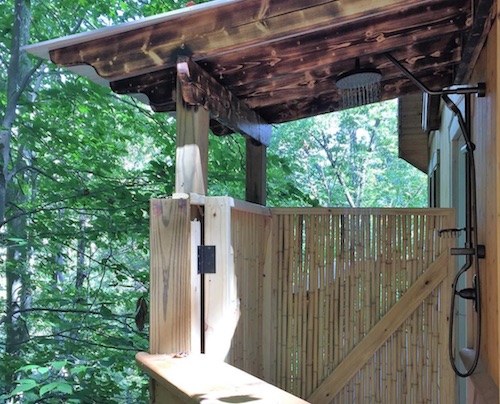 The outdoor shower, with endless hot water, also caused endless headaches for the Greenes during construction.

“It’s going to be very good business,” he told The Centurion. “From the standpoint of the experience people get in the jewelry store as compared to what’s going on here, it’s so similar.”

Watch the construction of Moonstone Skycastle on DIY Network. The episode first aired in June, was repeated in July, and will be repeated again on August 10. It’s also available from Amazon Prime.