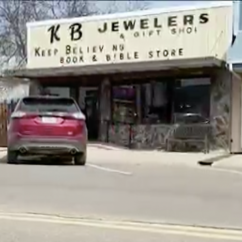 Hettinger, ND--KB Jewelers has been in business for 45 years, and its memories are plenty.

Kent Brackel purchased the store in 1977. “He was just three months shy of his 21st birthday,” recalls Kent's wife, Kathleen Brackel, in an interview.

The interview notes that Ken is a certified and licensed watchmaker. He's also been engraving trophies in his store since 1982.

Kent's marriage to Kathleen also added much value to the store. “I just am bursting with pride at what we’ve done with this store,” Kathleen, who's in charge of the gift shop portion, said in the interview.

The store has been around for over four decades, but some things have remained unchanged. All sales receipts in the store are handwritten. “It’s kind of old-fashioned,” Kathleen said in the interview.

The town's been good to the couple and the store too. And they only hope that the store will someday be taken over by someone who can keep it open for the people of Hettinger and the surrounding community.

Read more in the entire interview.