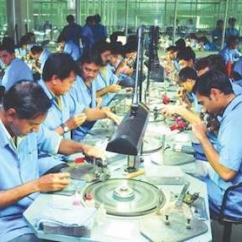 Washington, DC—India is now in U.S. trade target sights. The country has been part of the US Generalized System of Preferences (GSP) program, which lets developing countries send some products into the US duty-free, to foster economic growth. (Left, workers at a diamond polishing factory in Surat. Image: Dawn.com)

But now that India has one of the fastest-growing economies in the world, president Trump sent a letter to Congress Monday saying that he plans to end India’s GSP status. Citing tariffs on Harley-Davidson motorcycles, he says India hasn’t given U.S. companies fair access to its markets.

While Indian government officials acknowledged it probably doesn’t belong in the GSP program anymore, they denied limiting access to its markets.

The list of preferred products does not include loose diamonds, but it does include almost everything else related to jewelry and watches: gold, silver, jewelry containing precious or semiprecious stones, watch bands, and much more. It also includes synthetic stones, and “cultured crystals, weighing not less than 2.5g each except in the form of ingots,” which clearly may impact lab-grown diamonds, many of which are grown in India. Assuming the program is ended, prices for Indian-made jewelry goods could rise anywhere from modestly (3%) to moderately (more than 7%).