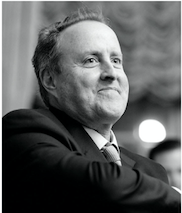 Boston, MA—David Walker (image), owner and president of Shreve, Crump & Low, has passed away. A statement from his family announcing his death did not list a cause.

Walker was the son of a jeweler, Frederick J. Walker of Wellesley, MA, a suburb of Boston. Although his father tried to discourage David and his four siblings from going into the jewelry business, David applied to work at Shreve, Crump, & Low, a Boston institution and nationally renowned luxury jeweler. He didn’t get the job.

Shreve, Crump & Low traces its roots back to 1796, while George Washington was still president of the fledgling United States. Originally established by watchmaker and silversmith John McFarlane, who opened a workshop across the street from legendary silversmith and Revolutionary war hero Paul Revere, the store is widely acknowledged to be the oldest purveyor of jewelry and luxury goods in North America.

After being turned down for the Shreve, Crump & Low job, Walker opened his own business, called David & Company, while also having a large presence in the wholesale jewelry community. But Walker’s family says his true passion in life was the pursuit of acquiring rare diamonds and gemstones.

In the mid-aughts, the venerable Shreve, Crump & Low ran into financial problems. In 2006, Walker bought the company, saving it from potential bankruptcy. It was ironic that he now owned the company that once wouldn’t hire him, not to mention going from a small company of eight employees to one with 88 employees overnight.

His expertise and perseverance not only saved the company, but grew it beyond his wildest expectations, says the family statement. Today, it has two stores, in downtown Boston on Newbury Street, and in Greenwich, CT.

Unlike his own father, David Walker encouraged and welcomed his three children, Brian, Bradford, and Olivia, into the business. Brian works at the Boston store and Bradford and Olivia are in the Greenwich store.

In addition to his three children, Walker is survived by his loving wife, Antonella. No further information about a memorial was available at press time.

Next article:
Free Webinar Thursday! Protect Yourself In Memo Transactions