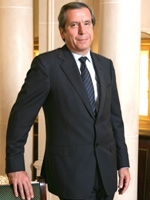 New York, NY--Henri Barguirdjian, a longtime leader in the high jewelry sector, died suddenly on October 13. He was 63.

The French-born Barguirdjian was the founder and managing partner of Arcot Finance, a gem investing company, at the time of his death but he rose to worldwide industry renown for his positions with such jewelry houses as Graff, Van Cleef & Arpels, and more.

Immediately prior to founding his investment company, Barguirdjian was president and CEO of Graff Holdings, Inc. and its subsidiaries since 2000, stepping down in September 2016. He oversaw the opening of the London-based House of Graff’s flagship U.S. store on Madison Avenue in New York in April of 2001 and its subsequent expansion to four freestanding boutiques and nine shops-in-shops at Saks Fifth Avenue.

Barguirdjian served as president and CEO of Van Cleef & Arpels in New York from 1993 to 2000, and was the driving force behind the modern launch of its popular Alhambra collection. He also served stints with Chaumet in Paris from 1991 to 1993 and was president of Harry Winston’s retail division in New York from 1986 to 1991.

Many in the luxury sector of the industry regarded Barguirdjian as a beloved mentor. It’s not a surprise, as my own recollections of him are very fond. I interviewed him for JCK’s Luxury magazine when he was still at Van Cleef & Arpels, for the debut of Alhambra and its plans to wholesale the line to better jewelers. From that point on, he and I always managed to find a few quick moments to say hello at any industry event, and he always had a hug for me.

Despite his lofty standing in the global luxury industry and his impeccable pedigree, Barguidjian was entirely down-to-earth and easy to talk to, and very willing to share his expertise. He also had an insatiable love of French fries. After the interview at Van Cleef & Arpels, his team and I went to lunch at one of New York’s famed fancy luxury watering holes, where despite the lofty atmosphere, he dived into a plate of fries with joy.

No further information was available at press time; this article will be updated as more becomes available.