Seattle, WA—For years, Admiral Herb Bridge was a fixture at AGS Conclave, as well as other industry shows and events. The soft-spoken, self-effacing former Navy man was a leader in the truest sense of the word: a man who led by example and not decree; one who never forgot a name; and one whom others looked up to, whether in the jewelry industry as one of the nation’s top retailers, in the business community of his native Seattle where he helped drive the revival of the city’s downtown, and the United States Navy and Naval Reserve, where he enjoyed a 41-year career beginning in WWII.

Bridge died at home Tuesday, surrounded by family. He was 93. 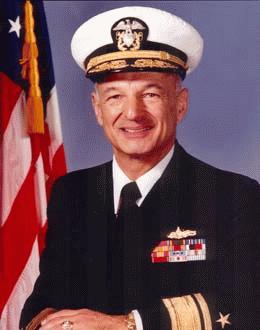 Admiral Bridge in his naval uniform.

Herbert Marvin Bridge, the son of Ben and Sally (Silverman) Bridge, was literally born into the jewelry industry in 1925. Bridge’s grandfather Samuel Silverman was a fine guild watchmaker in Seattle. After marrying Sally Silverman, Ben Bridge became a partner in Silverman’s store, then bought Sam out and renamed the business Ben Bridge Jeweler in 1927, when Herb was two years old.  Herb began working at the store “as soon as he could see over the counter,” as he recalled in a newspaper interview. Like many in the industry, his first responsibility was sweeping the floors in the store. In fact, he liked to relate the story of how, when he returned from WWII in his fine naval officer’s uniform, his father said, “that’s a nice uniform. Now go hang it up and start getting the place swept out.”

At age 18, when Herb was at sea serving in the Navy’s Pacific fleet, he received a letter from Ben, saying he was now one-quarter owner of the store. It contained an IOU for $6,000 that he was to sign and return to his father. Six years later, his brother Bob received an identical letter--but the elder Bridge never asked to collect on his sons’ notes.

Ben Bridge Jeweler remained a single store until the early 1950s, when Herb and Bob Bridge opened a second store. By the 1960s, malls were proliferating as the retail format of choice, so the Bridge brothers expanded with it, opening both mall and downtown locations across the western United States and British Columbia, Canada. Today the firm has 93 stores in 11 states and operates five Pandora boutiques in British Columbia. 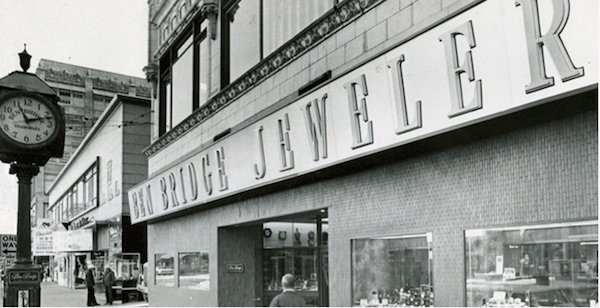 The original Ben Bridge Jeweler store in downtown Seattle where Herb Bridge began working "as soon as he could see over the counter." In a local history article, he says this always remained his favorite of all the chain's stores, and he used to have to climb a ladder to the top of the outdoor clock to care for its mechanism.

As it continued to grow, the next generation of Bridges—Ed and Jon—took over, although Herb and his brother Bob eventually rose to become co-chairmen of the business, remaining involved in the jewelry industry well into his elder years. Ben Bridge was sold to Berkshire Hathaway in 2000 but continues to be run by the Bridge family; fifth-generation Lisa Bridge recently took over as president, both the first woman and the youngest top executive in decades to lead the retailer.

Herb Bridge’s son Jon called his father “a force to be reckoned with.” Certainly he was a force in the jewelry industry, serving as both a leader and a mentor, especially to colleagues in the American Gem Society. He served as chair of the AGS Board of Trustees, and was a winner of both the association’s two prestigious awards, the Robert M. Shipley Award and the Circle of Distinction Award (twice; the Triple Zero Award in 2000 and the Lifetime Achievement Award, together with the entire Bridge family, in 2012). He and Bob also were awarded the GEM Award for Lifetime Achievement in 2005.

Bridge also was a force in the Seattle business community. Nicknamed “Mr. Downtown” for his staunch advocacy and work in revitalizing the downtown business district, Bridge received countless awards for his leadership and philanthropy in civic, Jewish, and Democratic political causes. Indeed, those who live in, work, shop, or visit Seattle’s hip, clean downtown or famed Pike Place Market can thank Bridge for helping to restore vitality to those areas and turn it into the destination it is today.

But those who knew Bridge well knew there was another side to the quiet, authoritative man in a suit and tie. Bridge was an avid motorcyclist and member of the Hell’s Rotarians for decades. He also was a staunch supporter of civil rights and equality for all. 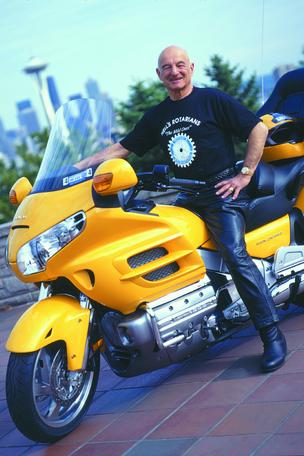 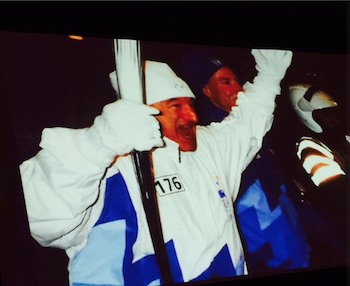 Herb Bridge on his beloved motorcycle, left, and as one of the runners carrying the Olympic torch into the Vancouver games in 2010. Images: Puget Sound Business Journal

On March 14, 2015, Seattle mayor Ed Murray proclaimed “Herb Bridge Day” in honor of Bridge’s 90th birthday, which was celebrated by friends and family from around the world at a surprise party at the Museum of History And Industry—in a building that Bridge knew well, as it once housed the Naval Reserve offices.

On a personal note, I first met Bridge in the late 1980s, when I was a junior editor at JCK. He always gave me his full attention, even though there were many more senior people clamoring for his ear. He believed in always answering questions with grace, and always took time to chat and to ask about my take on the jewelry business, even as junior as I was. That didn’t change as he moved into the chairman’s role and I moved into the chief editor’s office at JCK. Whether junior editor or senior executive, he treated everyone with the same respect, something I always admired. We also briefly chatted a bit about his time in WWII, as my father also was a WWII veteran.

Bridge is survived by his two sons, Dan (Simcha Shtull) and Jon (Bobbe), four grandchildren, five great-grandchildren, and his partner, Edie Hilliard. Bridge’s first wife, Shirley, predeceased him in 2008. A private service will be held for family this week; a larger public memorial will be held April 17 in Seattle.

In Herb Bridge’s true self-effacing style, the family requests that in lieu of flowers, donations be made to your favorite charity.