Hollander, born in Amsterdam in the Netherlands, emigrated to the United States where he quickly became one of the early leaders in American designer jewelry. This was during the 1980s and 1990s when designer jewelry was still an experimental category, and retail jewelers were reluctant to try to sell the unusual pieces or to sell them under the designer’s name instead of the store name. Hollander was renowned for his sculptural designs—especially split shanks—that incorporated distinctive colored gems and geometric gem shapes. 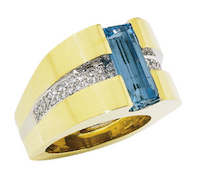 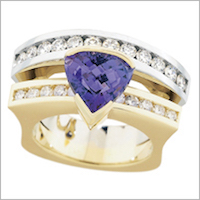 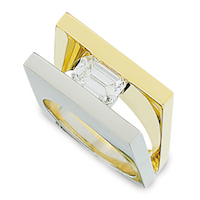 He also was renowned for his tremendous sense of humor. Throughout his cancer treatments, he kept a positive attitude and his humor intact, posting images on Facebook and describing his chemo infusions as flavored cocktails, always making sure his Facebook friends had an ongoing view of the crazy socks and hats he wore to the hospital.

His humor also softened his blunt way of telling it like it is, such as when it came to design copying. “Even suing the hell out of the @#%$! doesn’t help,” he once observed to me in an interview for an article about knockoffs that I wrote in the 1990s when I was fashion editor of JCK.

If there was one thing Hollander loved as much as his beloved gemstones and jewelry, it was wheeled things that go fast. He rode both motorcycles and cars with abandon, and frequently terrified any passengers brave enough to join him. Marylouise Sirignano Lugosch, executive director of the Contemporary Jewelry Design Group, recalls a terrified Susan Sadler (a CJDG designer based in Tulsa, OK), getting out of Hollander’s car:

“When Couture was still at the Phoenician in Scottsdale, CJDG used to send four designers [to attend] and showcase 16 designers’ work, four per showcase. Because Cornelis was in Scottsdale and he had a vault, we would send the jewelry to him and he would drive it to the Phoenician. One year, Susan Sadler was one of the designers and he picked her up at the airport in one of his hot little cars, and drove her and the jewelry to the Phoenician. She thought she wouldn’t live through the drive! He drove so fast and like a race car driver. Susan said she’d never been so terrified, but he laughed the whole time.”

Hollander loved color in both his jewelry and his life. Orange was a special favorite and he horrified many of his biker and auto aficionado friends with his insistence on wearing orange jackets for riding and/or painting his bikes and cars orange or other vivid colors. 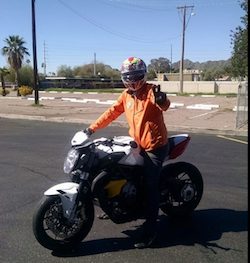 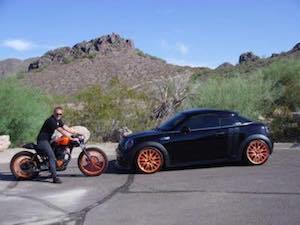 One such automobile was a little red and yellow Mazda Miata convertible, painted on the diagonal like the nautical flag that symbolizes the letter O. Hollander and I shared many laughs at various trade shows over the years and he was always ready to make time for an interview, but my best memory of him will always be in the mid-1990s when he picked me up at the Phoenician in that car.

For one thing, I had always wanted a Miata convertible myself. They’re not terribly practical in Philadelphia, so I never got one, but I enjoyed riding in Cornelis’s. As for that ride, either he was being kind to the press or I don’t scare as easily as Susan, because I remember it as exhilarating rather than terrifying. I’m sure we went fast, but we didn’t go airborne or up on two wheels.

Hollander is survived by his wife, Christa, who worked in the business with him since its founding in 1984. He also is survived by his daughter and son-in-law, Dominica and David Dieffenbach, son Walter Hollander, daughter Estella Hollander, and grandchildren Evan and Claire Dieffenbach. Walter, who has worked with Cornelis in the business for 10 years and been very involved with designing for the past six years, will carry it on.

“My dad was most proud of just being able to create whatever he wanted and being successful at it. He loved traveling the world and having a great family all supported by the cool jewelry he creates,” Walter Hollander told The Centurion. “He was an honest man, a hard worker, and always had a positive attitude. I am grateful for him and just want to honor him by continuing the love of jewelry and design.”

A celebration of life ceremony will be held February 11; details will be posted when they are finalized. In lieu of flowers, the family requests contributions to the hospital where Hollander received his cancer treatment. Click here for the link or send to HonorHealth Foundation, 8125 N. Hayden Road, Scottsdale, AZ 85258.