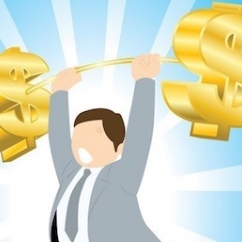 Merrick, NY—2017 holiday sales were strong, both for jewelers and retail in general. In November, general retail sales were up 5.2%, but when auto, gasoline, food, and building materials sales are excluded (making the figure more closely aligned to consumer spending and the GDP), the year-on-year gains for the month were 6.9%.

And The Centurion’s spot check surveys for the fall and holiday season show luxury jewelers did even better, far outpacing both the total jewelry index and the general retail index: in its first seasonal survey which covered November sales, more than half of respondents reported year-on-year sales gains of more than 10%, and when the season concluded, more than one-fourth of respondents reported gains of more than 10% for the holiday period overall.

The bull market on Wall Street keeps going up. U.S. GDP was 3.1% in Q2 and 3.3% in Q3. Unemployment is at 4.1% and expected drop to about 3.5%. Small business owners are feeling more confident than they have since 1983, and consumers clearly feel confident enough to spend. The Conference Board’s latest Consumer Confidence Index is at its highest level since 2000. 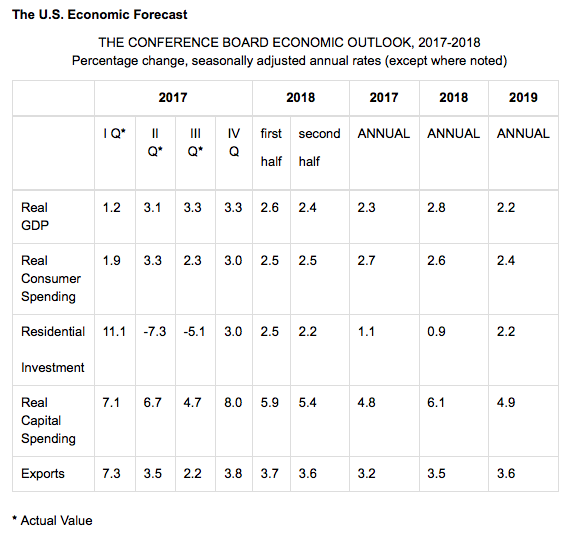 Chart: The Conference Board

Although the changing nature of today’s economy left large pockets of the United States out of the economic recovery, in the aggregate not only has the economy recovered, it’s booming. And a December 16 article in The Economist says wages are growing in real terms, with some of the biggest gains going to low-paid workers. 18 states and 19 cities have raised their minimum wages as of January 1.

“The US economy continues to fire on all cylinders with consumption, business investment, and external trade all showing strength entering 2018,” the Conference Board says. “Overall, expect 2018 to be a year where both growth and profits are plentiful. Spending growth should remain robust beyond the holiday season into 2018.” The Conference Board’s economic outlook calls for 2.8% GDP growth in 2018.

Laissez le bon temps roulez. But how long will the good times roll and the boom last?

At least a year or two more, is the consensus among economists. Although all cite potentially substantive risks for the longer-term picture, business owners should be able to comfortably plan for a good economic year in 2018 and probably 2019 as well.

“America’s economy is well placed for 2018,” says The Economist. Business investment is on the upswing: there’s a global rise in fixed capital spending that has been led by the United States.

“The momentum appears to be carrying over into the first quarter. It’s not quite at those levels [3.3%] but it’s certainly stronger than we saw in the first eight years of the recovery,” said Dr. John Silvia, Wells Fargo’s chief economist, in the company’s presentation.

Even better, Silvia says the growth has not only strengthened, it is broadening. “Early in the recovery, most of the economy’s strength came from either the tech or energy sector. Now 63% of industries are adding jobs and 59% of manufacturers are adding jobs.” Unemployment, now at 4.1%, is expected to keep dropping, he said. Both Wells Fargo’s presentation and the Conference Board’s forecasts were made shortly before the tax reform bill was passed, but Silvia expressed some hope that the reform will mean more people come back into the workforce and that equipment spending will lead to stronger productivity growth. And the Conference Board felt the tax changes will help keep confidence indicators at elevated levels. “Businesses will see tax burdens fall starting in 2019 under the Senate’s plan, but they will be able to fully expense investments starting a year earlier. Moving investments forward where possible—into 2018—allows businesses to reduce profits next year under higher tax rates and to begin earning more under lower rates in 2019. We therefore expect investment in equipment and software to continue rising in 2018.”

But don’t expect a dramatic upswing: Dr. Jay Bryson of Wells Fargo pointed out there’s been nothing holding back businesses from investing already. He says there’s tons of cash in corporate pockets and corporate bonds available, so he’s a bit skeptical that tax cuts will lead to a huge jump in corporate spending.

Right now, everything looks good, said Silvia. Business investment is up across the board: he pointed out that early in the expansion, a lot of business investment was in energy, but the rebound in business investment in the past year has been much more broad based, and fueled by strength in the global economy, a weaker dollar and, to some extent, some reshoring of manufacturing back to the United States. 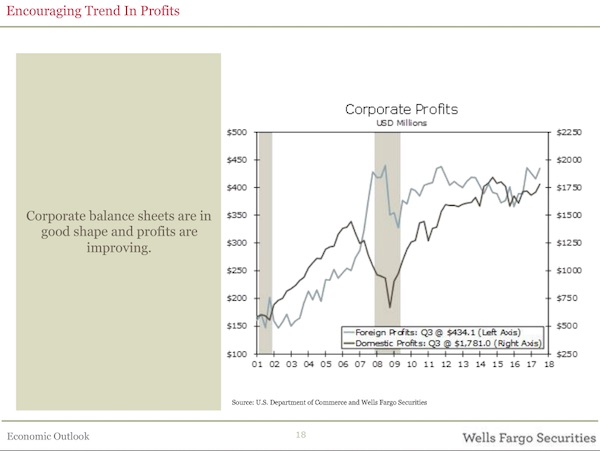 “We don’t see a recession in the near term, in 2018 or 2019,” says Wells Fargo’s Silvia. A recovery through 2018 will be the second-longest ever, says The Economist, and if it continues through 2019, Silvia says “that will mean we’ve gone longer between recessions than any other time that we have economic data for.”

Bryson, who is Wells Fargo’s global economist, said the global economy has picked up as well along with the U.S. economy. The recent slowdown in China has paused, Brazil and Russia are growing again, and even Japan and Europe have picked up. Global growth over the past 35 years has averaged about 3.5% per year, and he sees that continuing.

But growth in the BRIC countries, particularly China, is not likely to return to its rocketing rate, says Bryson. “That was a once-in-a-generation moment when China joined the WTO and really became part of the global economy. Other economies that were behind the Berlin Wall were joining and becoming part of it at a very rapid growth rate too, but that ship has sailed.” China now is growing at about 6.5% and Russia and Brazil at about 2% following deep recessions. These rates are fine, says Bryson, just not supercharged. He predicts U.S. GDP growth at about 2.5% to 2.7%, and the dollar is likely to continue to decline as is common in this part of its cycle. 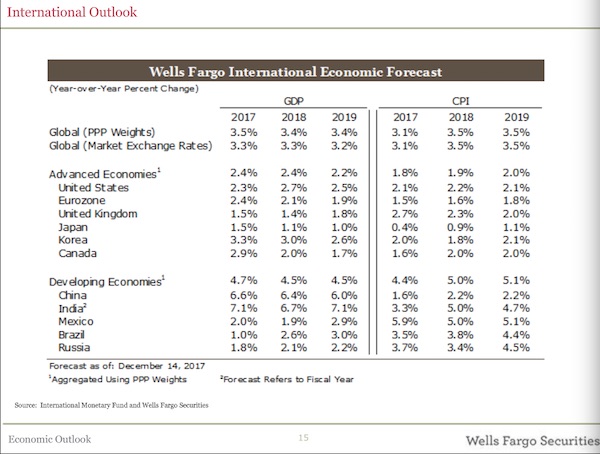 Globally, most of the risks Bryson sees are manageable. China might be in more debt than data suggests, but he doesn’t anticipate the Chinese economy to blow up. If things get particularly testy in the Brexit/EU divorce, or if Italy’s spring elections result in an anti-EU candidate, it could drive a recession in ether place, but it’s not likely to spur a global one.

Clouds on the horizon? Like long-range weather forecasting, economists see some distant signs that bear watching. But just as meteorologists know that a disturbance in the South Pacific has the potential to bring a snowstorm to the northeastern United States a few weeks later, they don’t know if it will be a four-inch nuisance or a four-foot blizzard, and so is it with the economy at this point.

Not least of these risk factors is simply the age of the recovery, agree economists. Despite conventional wisdom that we’re “due for a recession,” expansions don’t just die of old age--but like old people, old expansions are more susceptible to things that can bump them off.

“When you get this late in the business cycle, imbalances build up. What tends to cause recessions is that imbalances build up when times are good and the economy is growing, so people take on more and more risk. Then something happens to make individuals, businesses, and policymakers more risk averse,” explains Silvia.

Domestically, while wages are rising and especially for lower-wage workers, overall they’re not rising as much as the economic growth suggests they should, and the growth rate of real disposable income has slowed, according to Bill Conerly, an economic consultant and contributor to Forbes. Personal savings rates have slowed as well, he says. Economists concur that most of the individual gains from the tax cuts will benefit the wealthy, who tend to save more of their gains than spend them, so while greater wealth overall will boost consumer spending, it will be a modest gain.

Bryson believes investments need to be made to include the stalled parts of the United States in the recovery. “The future for those folks is clouded at best,” he said in an interview with The Centurion. “We don’t want those people to get left behind. In my own opinion, wise public policy is to commit resources to train those people for the jobs that are out there and well paying,” he said.

For instance, he says, plumbers and anyone in the trades is in huge demand, as well as people who can repair computers and repair the robots going into factories. “Those jobs, while they do require education beyond high school, don’t require a four-year degree. Many business leaders tell me their biggest problem is finding qualified people,” he said told The Centurion. In his view, not addressing the issue poses a risk to everyone’s economic future: “If Joe Blow gets really mad about stuff, it can affect you,” he said.

But Bryson and the other economists concur that the biggest potential risks to both the global and the U.S. economies right now are the geopolitical ones nobody can predict. Whether it’s North Korea, Russia, the Middle East, trade frictions, or other issues, there’s no way to know.

“Until they rear their ugly heads, we’re going to assume they don’t occur, and if they do, we’ll change our forecast,” he said.

For the jewelry industry, The Centurion doesn’t see significant new risks in 2018 beyond those already facing the industry: remaining relevant to Millennials (and now Gen-Z); consumer spending shifts toward experiences coupled with more casual lifestyles and tastes; the industry’s overall slow transition to digital; plus generational transitions and consolidations.