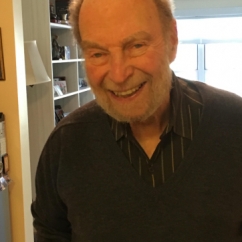 Born in 1930, Heyman was the son of the late Harry (Fannie) Heyman, who was a brother of the company’s namesake, Oscar Heyman. Marvin also was predeceased by his brother, David, who also had worked in the family’s jewelry company.

A graduate of New York University (NYU), Marvin Heyman initially studied at Ohio Wesleyan University for two years, an institution that remained near and dear to his heart for the remainder of his life.

Following a brief stint in the United States Army, Heyman went to work at the family firm in 1952, where he worked his way up from apprentice jeweler to running the workshop alongside his father Harry, ultimately becoming president of the company for 12 years from 2003 until retiring in 2015.

Like many other Heyman family members, Marvin was very civic and philanthropy-minded. He was a founding member of Bachurai Chemed in Long Beach, NY, and was an active member—including president—of Temple Beth Israel in Port Washington, NY. He devoted himself to working towards racial equality, fair housing, and anti-Semitism through his service as chairman of the Community Action Council and in his work on behalf of the UJA Federation of New York. He is remembered by those who worked with him both professionally and philanthropically as a selfless, modest, and loving man of few words. Family, friends, co-workers, and caregivers alike were moved by his playful, gentle spirit, kindness, and charity.

Marvin was father and father-in-law to Jon Heyman and Karen Rowe; the late Lisa Heyman and Larry Gauchman; Ben Heyman; and Ruth Heyman and Lisa Mandel. He is survived by five grandchildren and his former wife, Barbara. Marvin also is survived by his cousin, Adam, and nephews, Tom and Lewis, who run the company together, and various other family members.

Memorial donations can be made to the Amyloidosis Foundation or the UJA Federation of New York.