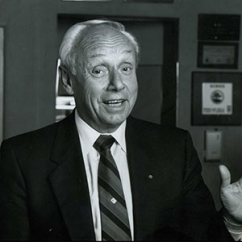 Solomon’s name was synonymous with sales training. A former Marine, he attended Washington State University and joined Ben Bridge in 1960, rising through the ranks to senior vice president in charge of training and personnel. He revolutionized not only how Ben Bridge hired and trained its own sales associates, but essentially turned the industry standard for hiring and training on its head. Lisa Bridge, now president of Ben Bridge, still remembers the lessons he taught her: “Hire people who love people and who love jewelry. You can teach everything else but you can’t teach someone to be a nice person.”

Related: Lisa Bridge, Fifth Generation Jeweler, On The Importance Of Your Values And Your Story

Solomon was a frequent speaker on the topic of sales training at both industry and non-industry civic events, where he also captured the audience’s attention with magic tricks while he emphasized his points. He ultimately authored a book, Selling From A To Z, which distilled his key lessons into memorable points.

One of his lessons is the “other 4C’s” of sales: contacts, chutzpah, closing techniques, and consistency. Always be open to meeting people, whether on the sales floor or in other places, he said, and always be fearless. Push beyond your comfort zone and take the time to learn about other people’s interests and professions. In closing a sale, confidence matters along with consistency and keeping a positive attitude.

Like the entire Ben Bridge organization, Solomon was passionately committed to the American Gem Society. He served as president of AGS’s Northwest chapter and on its national board. In 1998 he was awarded the association’s highest honor, the Robert M. Shipley Award.

Solomon is survived by his wife, Arlene, two children and three grandchildren.