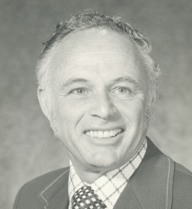 Kern was born December 19, 1922 in Santa Barbara, CA, to Joseph and Irma Kern. He began working for jeweler Roy Churchill afternoons in high school. He was still working at the shop and had finished one year of college at Santa Barbara State College (later renamed University of California Santa Barbara, or UCSB) when he entered military service in World War II. He fought with the 76th Infantry Division in Europe as a member of General Patton’s Third Army at the Battle of the Bulge.

After serving his country, Kern came back to California and returned to work at Churchill’s. He finished college, graduating from UCSB with a bachelor of arts degree in industrial science. In 1947 he married Dorothy Willson and they welcomed triplet daughters in 1955.

When Roy Churchill died, Kern purchased the business from his estate and remained in it for the next 43 years, accompanied by his daughter, Lexi Kern Hirst, who took over the store when Kern retired. Hirst herself retired four years ago and the 98-year-old store closed permanently at the end of 2016.

Kern's other daughters did not enter the jewelry business. Both are college professors: Lee Kern at Lehigh University in Pennsylvania, and Lynn Kern Koegel, at Stanford Medical School in California.

Kern was very active in the jewelry industry, serving as president and board member of the California Jeweler’s Association, and on the board of Jewelers of America for two terms. He was a member of the board of Jewelers Mutual Insurance Company for 21 years, and was its chair for 13 years. Locally, Kern was one of the charter members of the Optimist Club of Santa Barbara, and was very active in the city’s downtown revitalization organization. He also was an avid golfer.

Next article:
The Lesson Of Rolex: When Innovation Is A Continuous Process