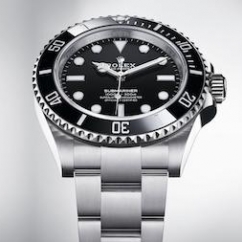 Geneva, Switzerland--In watchmaking circles, people tend to mock Rolex fans who buzz with excitement on social media because the brand with the crown logo has made some minute change – the shape of a hand, a touch of colour – to one of its iconic models. But they’ve got it all wrong. Because that is precisely the essence of innovation as practised by Rolex.

It is the very source of its undeniable, unabated global success. Take the case of the Submariner. Starting as a radical, disruptive innovation – the Submarine watch of 1922, the first step towards waterproof watches, then the Oyster in 1926 – its subsequent history is one of a slow, gradual accumulation of innovations, sometimes discreet, all of them stages in the steady improvement of a product which nevertheless remains virtually identical in appearance.

To read more and see a visual timeline of Submariner’s subtle advancements, click here to continue reading on EuropaStar.com, part of the ongoing editorial alliance between Europa Star and The Centurion.