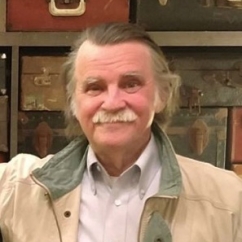 Hatboro, PA—William George Shuster, an award-winning editor and reporter in the jewelry industry, died August 30 from complications of diabetes. He was 71.

Called “Bill” by colleagues, Shuster spent more than 30 years at JCK magazine. He was best known for his in-depth and thorough coverage of the watch industry, where he bore witness to four decades of change, including the quartz watch crisis of the late 1970s/early 1980s, the renaissance of luxury mechanical watches, and the introduction of the smartwatch. Shuster also covered the majors for JCK, and was well-regarded by executives of all the nation’s leading chain jewelers as well as its top independents.

As a separate project for the Gemological Institute of America (GIA) in 2003, Shuster wrote Legacy of Leadership, an extensive and thorough history of GIA from its founding in 1931 up to that point.

After leaving JCK in 2009, Shuster worked part-time in the industry for top international publications such as GZ (Goldschmeide Zeitung) and the Basel Tribune, the daily newspaper produced during the Basel Fair. Prior to joining JCK—his entry into the jewelry industry—Shuster was a local news reporter at the Bucks County Daily Intelligencier. He was a proud graduate of Wheaton College, Wheaton IL.

Throughout his career, Shuster was honored with many journalism awards, including the Jesse H. Neal award, Chilton Awards, FOLIO Eddie Awards, and more, yet remained unfailingly humble and declined even the smallest of token gifts in an industry where “swag” is routine.

On a personal note, I counted Bill as not only a colleague but a dear personal friend. Many former JCK staff and watch industry colleagues have recounted on social media how kind and helpful Bill was, even if they worked for a competing publication. (Read tributes from fellow journalists Peggy Jo Donahue here, Roberta Naas here, and Rob Bates here.)

Bill was incredibly helpful to me, especially on my first trips to Basel as JCK’s fashion editor and later when I became editor-in-chief of JCK. Before my first trip to Basel, he prepared an extensive information packet, writing out directions to get around the city and details about the fair itself. He also gave me a to-the-minute agenda of his own schedule in case I needed him.

Later, as chief editor of JCK, I always knew Bill had my back no matter what.  Even when he vehemently disagreed with something I said or did, he came through for me every time, excellently and without fail.

Deeply devout in his Christian faith, Bill often included a quote from Scripture or an appropriate line of poetry in greeting cards and other notes. An Evangelical Lutheran, he faithfully said grace before every meal, whether in the Chilton Co. cafeteria or at an industry dinner. Always the leader in marshaling the JCK staff to celebrate a birthday or mourn the loss of a colleague, on 9/11 he led us in ecumenical prayer as we stood in front of a small portable television watching the Twin Towers fall.

Ironically, as I was writing this tribute to Bill, I also was working on our story about how jewelers are helping after Hurricane Harvey. At JCK we called him Bill “Hurricane” Shuster, as he always covered any disaster that impacted jewelers.

Much has been said about Bill’s kindness, gentleness, knowledge, and humility. But Bill also had an insatiable curiosity and thirst for knowledge, an encyclopedic memory, and a keen sense of humor. He loved Shakespeare, poetry, literature, space and science fiction (he was an ardent “Trekkie”), and Monty Python. Any malfunctioning piece of JCK office equipment would inspire an accurate rendition of Monty Python’s “Dead Parrot” sketch, with the offending piece of machinery in place of the parrot. As a master punster, Bill had no equal, and when he started a volley of puns it could last for days. An avid photographer, he chronicled every trip and JCK celebration lunch with his trusty camera, humorously catching colleagues with forks in mouth.

Bill loved to drive extremely fast. A pacifist his entire life, he was granted conscientious objector status in the Vietnam War, but served his country in a noncombat role in a medical unit. He told the story that while in the army stationed in New Mexico, he was pulled over for speeding. The police officer asked if he realized he was traveling at 120 mph, to which Bill replied, “Yes, Officer, I do. Is there a problem?”

We also joked about Bill’s love of fast food. Despite his passion for world travel, Bill's idea of a royal meal was dinner at Burger King and dessert at Dairy Queen, and another former colleague, Russell Shor, now senior industry analyst at GIA, recalled that Bill could map out every Burger King in Hong Kong.

Bill was extremely proud of his German heritage. His German-born mother was stranded in the United States in 1939 when WWII broke out while she was visiting relatives here. Her family in Germany—with whom Bill remained close his entire life—ardently opposed Adolph Hitler and Nazism, suffering great risk and consequence for their views. Every year prior to the Basel fair, Bill would first accompany his mother to visit her family in Germany, and as soon as the fair concluded, he would head back to pick her up and travel home with her.

Preceded in death by his parents, William and Lieselotte Shuster, Bill is survived by his brothers, Ronald (Ron) and Robert (Bob) Shuster. In lieu of flowers, the family asks that donations be sent in his name to three of his favorite charities: World Vision, Wycliffe Bible Translators, or Samaritan's Purse.