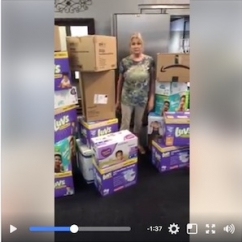 Merrick, NY—Around the nation, the fine jewelry industry has shown its typically generous heart again and stepped up with efforts to help its colleagues in Houston and other parts of south Texas hit by Hurricane Harvey. Here are some of the ways jewelers around the country are helping, and ways you can help too.

In Conroe, Texas, Barbara Parker’s Diamond Vault has turned its showroom into a relief center. The jeweler, about 45 minutes north of Houston, was not personally affected, but as a Texan and humanitarian, she was inspired to help any way she could.

“It’s devastating,” she told The Centurion. “Nobody can imagine unless you see it. We have horses that have been swimming in water literally for a week, swimming so much that their hair has come off their bodies. Cattle drowning. It’s just so sad.

“I don’t need to sell diamonds this week. I need to get socks and baby formula and underwear and toothbrushes and school supplies, and whatever. I told every one of my friends and clients all over the United States, ‘Instead of buying that $20 bottle of wine, you can call Amazon and get a $20 box of diapers delivered free.’” Above left: Baby supplies are especially needed.

Getting on the phone and on Facebook with live videos, Parker put out a call to her clients to help the community in any way possible and they have responded in a big-as-Texas way. Donations of baby supplies, school supplies, towels, clothing, food, and more are pouring into her showroom nonstop. Even as The Centurion was interviewing Parker on the phone, the United States Postal Service showed up with 12 more big boxes, which her husband was immediately dispatched to begin opening and sorting.

She continued, “People need help. It’s absolutely devastating. There are things people really can do. My part is on weekends sorting at shelters and helping there, and during the week to get on Facebook and say we need help, anything we can get. Anything. It doesn’t matter.” (One thing they don’t need: winter clothes. Houston has a climate like Miami.)

Parker’s store is serving as a staging area. Food banks in Houston and in Montgomery County, where Conroe is, have food banks where people can drop things off, but they need drop-offs in an orderly, sorted fashion. Parker has been sorting all the donations in her store—men’s, women’s, boys’, girls’, socks, toothbrushes, etc., then taking it to the food banks, who package things in bags for people to come and get or they take them to shelters for people there. 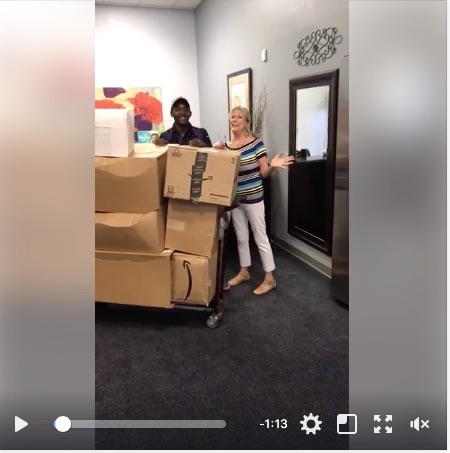 Barbara Parker with Lamont, her FedEx delivery man, who lost his own car in the flood.

“Thousands of people are still in shelters with nowhere to go. They have no home, the hotels are full and a lot of people can’t afford to stay in hotels anyway,” says Parker. Her FedEx delivery man who has been bringing in donations himself is ok at home—only about four inches of water—but his car is gone and he has no idea where it floated off to. But he has friends with broken legs, or who were trapped in cars or lost their homes, so he considers himself very lucky.

“We’re doing what we can do by collecting things. I don’t mind saying to my clients, ‘You’ve asked me for lots of favors and I don’t mind doing them for you, but now I’m asking you for a favor for these people. Just send something. And they are.

“We have one customer owns huge shoe factory in California and they’re sending shoes upon shoes, brand new. Not used, new. Today we received Play-Doh and Crayola for all the little kids who were excited about their first day of kindergarten, but now their schools are flooded and their new school clothes are gone.”

Parker started her business in Dallas 28 years ago, but moved her store to California when her husband was transferred there for work, and later moved it back to Texas. Through word of mouth—she’s never advertised—she has clients all over the United States, and many in the NFL thanks to helping a few pro football players years ago. All those clients now are responding with goods to help Harvey victims.

Normally, Sundar Moorthi is at the cutting edge of technology. As president and CEO of AUGMENTes, Moorthi is focused on helping jewelers sell more through augmented reality, one of the cutting-edge tools in the digital space.

But this week, he’s hard at work with more low-tech tools: a crowbar, a hammer, and a very big pot. Based in Sugarland, TX, Moorthi and his family and friends are working to help neighbors clean up after Hurricane Harvey in two ways: they’re both helping with cleanup and cooking food for cleanup volunteers. 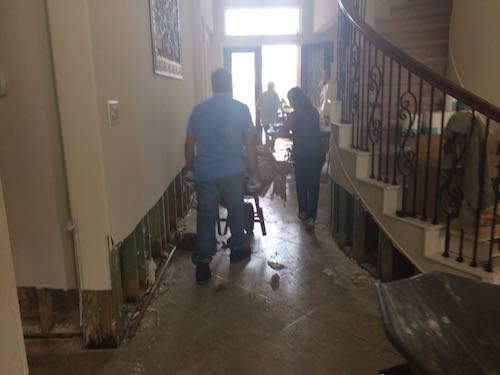 Moorthi and volunteers carry out saturated drywall from a home.

“We were close to the flooding but we were very lucky and dry inside. But a lot of families need help. There are 100,000 homes in need of cleaning!” he says.

“Everyone is focusing on getting drywall and carpets and flooring out before the mold gets in.  You have a very short time to get it out,” he explained. Once the water is drained, carpet, floors, and drywall must be taken out within 24-48 hours, or else they will get mold. Even things above the waterline can still get mold, as it spreads rapidly. 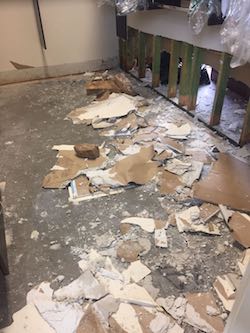 Drywall has to be removed immediately or mold will spread throughout the house.

“It depends on how long water is in the home, how far it will go up thedrywall. It depends on the weather, the humidity. We need to get the AC on and dehumidify the whole thing,” Moorthi says. In areas where there’s still standing water the power isn’t always on, but areas that have been drained generally have power now, he said.

His family bringing food to the volunteers so they can keep working to beat the mold. “We had 52 inches of rain in four days in my area, in Sugarland. There were 10,000 people just in the convention center shelter last weekend. Definitely a lot of help is needed at least for the next month.” 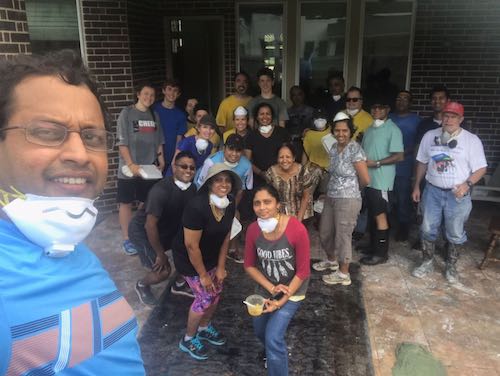 Moorthi with a team of friends and family volunteers.

And very likely, long after that. “Many people are doing it, not only me. Lots of people are coming from outside. Whatever we can, try to help,” he says.

Click here or on the image below to watch a video Moorthi filmed of the destruction.

Jewelers of America, the Diamond Council of America, and National Jeweler have created a GoFundMe page to collect donations for independent jewelers within the Houston area that are hardest hit by Hurricane Harvey. The organizations are asking the jewelry community to band together and help fellow jewelers in their recovery efforts. All funds raised will be dispersed equally and directly to independent jewelry stores, regardless of affiliation.

“It's our mission to help jewelers in times of success and distress, and we believe we are stronger together. Let's band together as a jewelry community and help fellow jewelers in their recovery efforts,” say the organizations. You can find the Hurricane Harvey Jewelers Support Fund here: https://www.gofundme.com/hurricaneharveyjewelers/. The Texas Jewelers Association also has set up a donation fund; access it here.

Dallas Select Show Raffle With Matching Donation Up To $5,000

The Select Show in Dallas, Texas, taking place this coming weekend (September 10-11) also is raising money for those affected by Harvey.

“Our hearts go out to those affected by Hurricane Harvey and we are in a position to help,” said Select Show director Jordan Brockhaus.

The show will feature a “Texas-sized raffle” with a “Texas-sized prize.” Attending retailers and manufacturers are invited to purchase raffle tickets for $20 each or 5 for $100. The winner will receive a two-night stay at the Dallas Ritz Carlton and a $200 gift certificate to Del Frisco’s steakhouse nearby. The Select Jewelry Show will match donations up to $5,000, and all proceeds go to the American Red Cross Harvey Relief.

Raffle tickets will be sold at the Show and attendees do not have to be present to win.

Show founder Joe Carullo of KC Designs said, “The Dallas Select Show will support the state of Texas now, as it always has for the last eight years.”

Rembrandt Charms, based in Williamsville, NY, near Buffalo, is offering temporary housing and work for those in the industry displaced by the hurricane.

“We are prepared to offer several temporary housing options in Colorado and Buffalo, NY, to retail jewelers and their families that have lost their homes. We can offer temporary work/income to those that are in need as well,” said Rembrandt Charms vice president Eric Lux in a statement. Rembrandt also will donate 100% of September’s proceeds from its 10 Texas charm styles to the Hurricane Harvey Jewelers Support Fund. 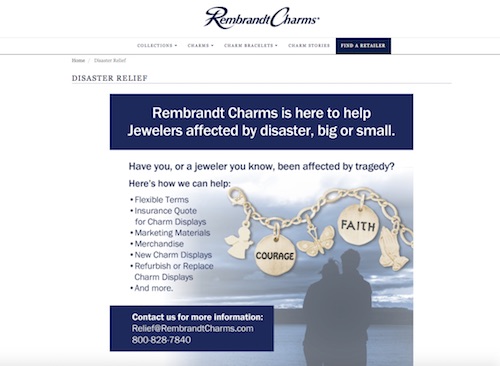 The American Watchmakers-Clockmakers Institute (AWCI) also is raising money to help watchmakers and clockmakers in Houston and surrounding areas who were affected by the storm. All funds will be given to independent watch and clock repair businesses, regardless of affiliation.

“The devastation we have seen in Houston is unprecedented and tragic,” says AWCI executive director Jordan Ficklin. “Operating an independent repair business is difficult enough without the challenge of a natural disaster. We knew immediately we had to do something to help those affected return to their businesses. There are not enough horologists as it stands. We can’t afford to lose a single one.” Donations can be made via Paypal.

New York, NY--Candice Pool Neistat, founder and creative director of Finn Jewelry, was born in South Africa but raised in Texas. The designer, whose works are found in stores such as Barneys New York and Grey Aspen, is donating 100% of profits from her Texas charm jewelry to Harvey relief, according to National Jeweler. The five items retail from $25 for a simple string bracelet with a sterling silver Texas charm to $600 for a 10k diamond pavé Texas charm pendant. 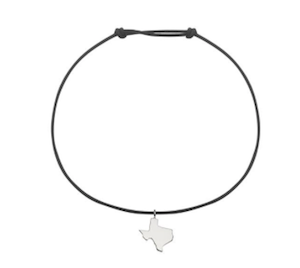 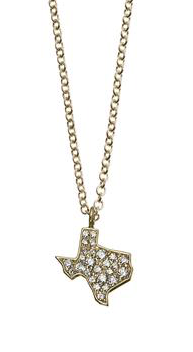