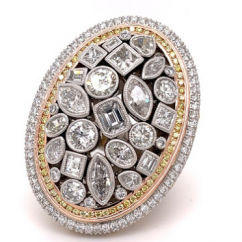 Lehigh Valley Live reports Dani Aslan and his wife Patti plan to offer a full-service store, including jewelry and watch repair of all kinds. He also plans to perform appraisals and diamond replacement, as well as prong work and vintage and antique jewelry restoration. Image: A ring from Aslan Jewelers.

Aslan has been a jeweler for nearly 30 years, reports the paper. Both he and Patti studied at GIA and for much of his career, Dani Aslan worked as a traveling featured master jeweler for restyling events held at stores around the country. He also specializes in custom work, says the article, and has worked with jewelry stores around the country and even created pieces for various Hollywood celebrities and famous sports figures.

The Aslans’ current store is located in Coopersburg, a nearby suburb. They’re planning to retain their operation in Coopersburg, but will be moving to a new location there.

Like many other malls, the Lehigh Valley Mall has suffered some store closings due to the pandemic. In addition to Helzberg’s exit, a Littman Jewelers store also closed, but it gained a major jeweler with the arrival of Murphy Jewelers in its outdoor Lifestyle Center.