London, UK—Gold has fallen to a 20-month low, losing 3% during the first half of August, reports the World Gold Council. For the first time since early 2017, the metal fell below $1,200 the ounce, and important technical support level. It rebounded slightly, trading at $1,203 at press time.

Gold was propelled down by the strength of the U.S. dollar against both developed and emerging market currencies, particularly the Chinese yuan and Turkish lira. The dollar's strength has been one of the most important drivers of gold's performance this year as confrontational trade rhetoric and sanctions has so far played in its favor. But at those levels, the WGC and other metals experts believe the price may bounce back as consumer demand is likely to be strong in the second half of the year. Additionally, should one of multiple current macroeconomic risks materialize, it would increase gold investment demand and drive prices back up.

But gold may rebound due to both technical and fundamental reasons: 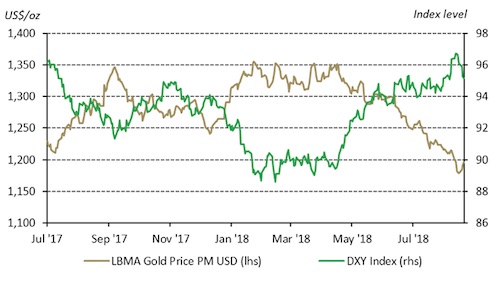 Gold’s pullback has been partly driven by dollar strength

Toronto, ON—The Canadian Jewellers Association (CJA) has appointed Marco Miserendino, CRJ, as the new chairman of the CJA Board for 2018-2019. Miserendino is vice president, managing director, and co-owner (with his sister Paola) of Bijouterie Italienne, an upscale familial jewelry store in Montreal.  Miserendino, an IJO Master Jeweler, also recently become a CRJ titleholder of the American Gem Society (AGS).

The full board is as follows:

Bogotá, Colombia—The Colombian Ministry of Mines and Energy, in association with the Colombian Geological Service and the National University, has budgeted US $30 million for a five-year “Mineral Digital Fingerprint” project that started in 2018. This project is based on a technique developed in Australia and applied in South Africa as a control mechanism for the commercialization of gold and precious stones.

The goal of the Fingerprint (La Huella) project is to provide an understanding of particular conditions and physical-chemical characteristics that were present at the time of the geological formation of a mineral, which then gives a specific geo-chemical DNA. This Fingerprint can also be traced at the different stages of exploitation, refinement and commercialization of the minerals.

The “Mineral Fingerprints” will be identified in the deposits where the minerals are formed as well as in the transformation processes such as smelting, refining, cutting, and polishing. In the case of transformed minerals, this technique can be used to determine whether they came from a deposit or if they were recycled. The infrastructure of the project will include accreditation by a certified laboratory, the construction of a data bank of Mineral Fingerprints, and the generation of a certificate validating the origin of the minerals.

“Thanks to Mineral Fingerprints, it will be possible to strengthen the audit process for control in the mining production chain, increase technological capacity in the generation of tools for the identification of the lawful and indisputable origin of minerals, and expand the knowledge and geological cartography of the subsoil,” explains Dr. Arce Zapata, outgoing Minister of Mines.

The project will be one of many discussions slated for the upcoming Second World Emerald Symposium, set for October 12-14 in Bogotá. The conference will present a wide range of topics, including geology, mining, responsible sourcing, ethical standards along the supply chain, new technologies for the supply chain, artisanal small-scale mining and formalization, gemology and gem origins, harmonization of descriptions, proof of origin, jewelry design and marketing/branding. Click here for information.

Separately, Joe Menzie, president of Gemstone Expeditions and former head of the International Colorstone Association ICA), will lead his last gem exploration trip of 2018 in October. The eight-day trip to Colombia will visit the famous Muzo, CHivor, and Cosquez emerald mines, and will include entry to the World Emerald Symposium. Click here for information.