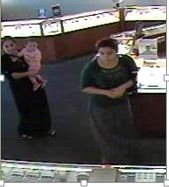 In Gilroy, two female suspects carrying an infant entered a retail jewelry store and asked to see multiple gold chains and rings, and selected several to purchase. The sales associate brought the items to the register area, and one of the suspects asked to cut the tags off the items and wrap them up in their own gift paper. During the sale process the suspects asked if the store accepted Euros. Since the store didn’t, the suspects stated that they would run to the bank to get their money converted to dollars. After the suspects left the store, the wrapping paper was inspected and one $12,000 ring was missing.

The suspects spoke fluent Spanish, and also spoke to each other in an “unknown European language.” They also spoke English. The same suspects had attempted the same type of distraction theft in Bend, OR a month ago, but the staff did not allow the theft to occur.

Some characteristics of Gypsy distraction techniques:

1. They enter in groups of two, three, four or more, often with babies in arms or with multiple children in strollers. The children are part of the distraction and are being used to convey an innocent impression to the sales associate.

3. The suspects seek to distract the sales associate with such behavior as wrapping requests, or requests to have the items placed in a box to hold for them until they return, or covering the items with a large purse while counting out a cash payment. At some point in this process, they conceal one or more items on their person to steal. At times they may attempt to place their hands in an open showcase.

4. The suspects find a reason to leave abruptly at the point of sale – such as not having enough cash or having only foreign money. The suspects then promise to return, holding out the prospect of a large future sale.

5. When the suspects converse with each other, they speak in a language described by a sales associate as “an unknown European language.”

JSA recommends sales associates guard against distraction thefts by showing only one item at a time, and keeping all showcases locked except when actually taking merchandise out or returning it to the showcase.

New York, NY—Continuing its emphasis on global reach and breadth of representation, The Diamond Empowerment Fund (D.E.F.) welcomes Marcus ter Haar, co-founder of the Botswana-based Okavango Diamond Company (ODC) to its global board of directors. A veteran of the diamond industry, ter Haar brings to the board 12 years of varied experience including posts at De Beers London, Debswana, and DTC Botswana prior to his current role as Deputy Managing Director of ODC.

Ter Haar has for years served on the board of the Lady Khama Charitable Trust, which focuses on vulnerable women and children. At the recent screening in Botswana of the new film A United Kingdom starring David Oyelowo as Seretse Khama and Rosamund Pike as Lady Khama, all proceeds from the screening went to benefit the Trust (the U.S. release of the film is slated for February 2017).  Through ODC, ter Haar has started an entrepreneurship program for enterprising young people across Botswana.

D.E.F. board president Phyllis Bergman says, “Marcus is a fabulous addition to our global board of directors. He truly epitomizes how ‘Diamonds Do Good’.” 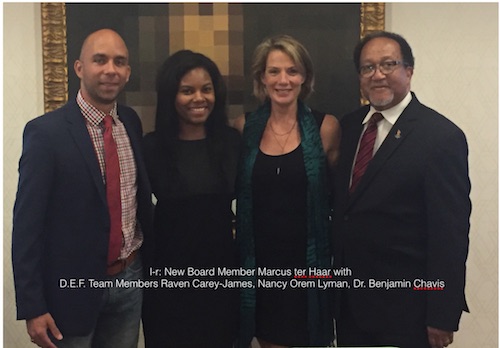 “I’m thrilled to be working with the Diamond Empowerment Fund and to help grow its mission and message. Never has there been such an important time for our industry to galvanize around the communication to consumers, especially the millennial consumer that ‘Diamonds Do Good’,” says ter Haar.

Vicenza, Italy—The January 2VicenzaOro jewelry show is going to be at least a week later than its former time slot in mid-January. The dates for the event are January 20 – 25, 2017, with the fall edition slated for September 23 –27, 2017. The third edition in Italy—typically held in May—was not announced but the organizers are planning to add a third event in late spring, according to a news release.