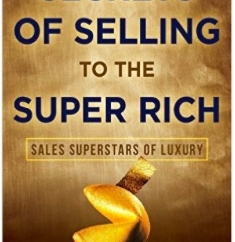 The book plays on the trio’s combined century of experience in businesses that sell to a super-rich clientele. To gain actionable insights, they interviewed top sellers in a variety of fields from travel to luxury lifestyle, hard goods (including jewelry and watches) and private aviation.

According to wealth researcher Wealth-X, UHNWs (Households with a $30 million + net worth) annually spend over $230 billion on luxury goods, and account for over 20 percent of all luxury purchases, including fashion, autos, timepieces, jewelry, luxury travel, and so forth.

"The goal was to get out of the ivory tower and get one-on-one with the people who actually sell to the UHNWs. We wanted to find out everything, from how they developed leads to building relationships, how they handled gatekeepers and intermediaries, how they nourished their customer relationships, and what worked and also what didn't," said Doug Gollan, co-author, who also publishes a weekly travel and lifestyle e-newsletter for private jet owners, DG Amazing Experiences.

For the jewelry/watch segment the book, the authors include interviews with Provident's Nick Linca, and sales expert Jon Omer, who has sold fine jewelry and high-end watches for such brands as Fabergé, Harry Winston, Buccellati, Neiman Marcus, and more. The Super Rich spend $25 billion annually on jewelry and watches, says Gollan.

The book has garnered praise from key luxury industry leaders such as Gregory Furman, chairman and founder of the 5,000 luxury C-level member Luxury Marketing Council, who called the book a “grand-slam home run.”

Matthew Upchurch, chairman & CEO of Virtuoso, whose 13,000+ luxury travel advisors generate over $15 billion in annual sales added, "This insider guide, informed by experts throughout the luxury industry will show you how to become a trusted purveyor to this exclusive market."

Amazon rated the book ‘#1 New Release in Marketing For Small Businesses.’ Click here to buy for $6.99 on Amazon.

New York, Y--One-carat diamond prices remained under pressure with low trading volume in August, according to a report from Rapaport. But prices for some other sizes showed a slight bump up. Overall, polished inventory is increasing with steady manufacturing and sluggish demand globally as dealers prepare for the fourth-quarter holiday season.

Diamond markets are conservative with buyers selective and price-sensitive, according to the Rapaport Monthly Report for September. Steady rough demand is enabling mining companies to reduce inventory built up last year. De Beers and ALROSA reported strong earnings in the first half of 2016 and growth is projected for the second half given last year’s low comparisons. Rough demand is expected to slow in the coming months as polished inventories increase.

Suppliers are hoping the September Hong Kong Jewellery & Gem Fair will stimulate stronger trading. Chinese buyers are pushing for higher discounts as they prepare for the October 1 National Day. Dealers are holding prices firm as they anticipate stronger selling at the show, even if they’re cautious for Christmas and the Chinese New Year. Sales in Hong Kong slumped due to the weak economy and lower tourist spending, while expectations for the U.S. diminished with disappointing sales at Signet Jewelers and Tiffany & Co.

The level of demand is deeply concerning to the trade, as large investments in marketing will be required to boost consumer demand this holiday season. The industry’s attention will focus on Signet’s and De Beers’ branded campaigns, and the Diamond Producers Association’s generic campaign.

New York, NY – Jewelers of America (JA) announces the continuation of its educational webinar series, which will cover a range of topics including better business solutions, legislative advocacy, strategies for jewelry marketing, social media and more. JA webinars are offered exclusively to Jewelers of America member stores and their employees as a free benefit of membership.

The next webinar in the series, “Consumer Path to Purchase: Jewelry Shopper Insights & How Financing Drives Sales and Traffic,” presented by Mike Bagull and Shelly Schulz of Synchrony Financial, will be held Thursday, September 8 at 1:00 pm Eastern time. The following webinar on Wednesday, September 21, 1:00 PM, will focus on legislative advocacy and a 2016 elections update, presented by Chris Fetzer, managing director of Haake Fetzer, Jenny Caro, co-owner of Jewelry By Designs, and JA’s director of public affairs and education, Susan Thea Posnock.

“Jewelers of America’s webinar series is tailored to providing insight on key issues that affect our members daily. The response to our recent webinars proves they are a great educational resource with valuable information that can be directly applied to a company’s business strategy,” says Posnock.

The remaining 2016 webinars include: “Essential Training for a Successful Holiday Season,” presented by Janice Mack Talcott of Janice Mack & Associates and Debbie Hiss, owner of Debbie Hiss Consulting, on Thursday, October 13 at 1:00 pm EDT, and an important pre-holiday social media presentation by CEO of Likeable Jewelers Dave Kerpen on Wednesday, November 2 at 1:00 pm. All times are Eastern. JA Members can view the full webinar series schedule and pre-register here.

Carlsbad, CA—One of the few surviving copies of a Bolshevik-era catalog of royal jewels seized during the Russian Revolution is available to the public for the first time as part of an extensive digitization project by GIA’s Richard T. Liddicoat Gemological Library and Information Center. This catalog, along with more than 200 other rare and historically significant books on gems and jewelry, is accessible on archive.org.

“Following the emperor’s overthrow in 1917, noted mineralogist A.E. Fersman, with help from experts and jewelers including Agathon Fabergé, was tasked with photographing and cataloging Russia’s regalia and crown jewels,” said Dona Dirlam, director of GIA’s library. “In 1925-26, the Bolshevik government published Russia’s Treasure of Diamonds and Precious Stones with the intention that the 406 Romanov jewels featured would never be sold. Eventually several of the pieces went to auction; approximately 20 copies of the Fersman catalog are known to exist today.”

The jewels featured in the Fersman catalog were collected by the Romanov dynasty, beginning with the reign of Peter the Great in 1689 until the overthrow of Emperor Nicolas II in 1917. Among the 406 treasures are the Imperial Sceptre set with the 189-carat Orlov diamond, the Imperial Globe set with a 200-carat sapphire, the Great Imperial Crown, the Imperial Nuptial Crown, chains, stars, crosses, emblems, diadems, necklaces, brooches, rings, earrings, as well as loose diamonds, emeralds, sapphires, rubies, spinels, pearls and alexandrites.

More than 200 important works, including major studies related to minerals, gems, and jewelry, are now downloadable for free through the GIA library digitization project. The project is central to GIA’s mission of ensuring the public trust in gems and jewelry and provides global access to more than 500 years’ worth of prominent works, beginning with the oldest book in the GIA library, Pliny the Elder’s “Natural History” (1496).

GIA’s library in Carlsbad, home to the Cartier Rare Book Repository and Archives, houses a growing collection of more than 57,000 books; 700 journals and magazine titles; 160,000 digital images and 1,900 videos, making it the world’s premiere repository of information on gems and jewelry. The library’s wealth of gemological knowledge is available to the general public, trade and scientific community. For more information, visit GIA.edu/library.

A selection of the 406 Romanov jewels featured in Russia’s Treasure of Diamonds and Precious Stones by A.E. Fersman, 1925-26.

The USKPA is a trade association formed in 2003 to administer the issuance of KPCs. Dr. Martin Hochbaum, formerly of the Diamond Dealers Club of New York City, is its manager. The board of directors also includes Cecilia Gardner, president and CEO of JVC (who also serves as the USKPA’s general counsel) and Mark Gershberg, president of Gemological Science International, New York, NY and Mumbai, India.

The USKPA licenses individual companies and common carriers to acquire and use KPCs. Each company licensed to export rough diamonds must file the electronic export information to the U.S. Customs and Border Protection’s Automated Export System and sign a licensing agreement obligating it to meet the requirements for reporting usage of each KPC to U.S. government agencies, confirming receipt of parcels to the customers abroad as well as maintaining the security of the KPCs while in their possession. Each licensee is subject to performance reviews by both the USKPA and the U.S. government. The licensee must also warrant each shipment as fully compliant with the Clean Diamond Trade Act, the United States legislation which implements the (KPCS).

Hochbaum added, “The working arrangement that was put into place in 2003 allows dealers here in the United States to acquire efficiently and use KPCs for exports of rough diamonds in compliance with the standards of the KPCS.  Signing the memorandum of understanding has formalized this partnership so that the parties are well informed of their roles and commitments.  We appreciate the support and cooperation provided by the U.S. State Department and the Census Bureau that has always promoted compliant rough diamond exports from the United States.”