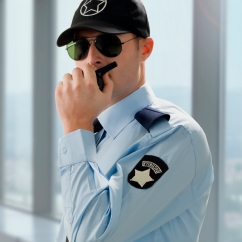 Security Update: Crime Statistics Trending Down; How To Hire The Right Kind Of Guard

New York, NY—The Jewelers' Security Alliance last week released figures last week showing that in the first six months of 2016 the number of reported crimes committed against the jewelry industry fell slightly—from 562 to 528 over the same period last year--and in dollar terms, losses from jewelry crime decreased by $2.4 million, from $33.2 million to $30.8 million.

Despite a spate of high-profile crimes in the last year, the overall decrease in jewelry crime is an ongoing trend, according to research from New York-based Karus Chains. The company, which routinely does extensive research, examined how the trend has progressed over a decade, and created a special infographic (below) comparing JSA’s crime statistics from 2005 with 2015.  Key highlights include:

Caemin O’Connor, head of research for Karus, discussed the steady decade-long decline in jewelry crime with JSA president John Kennedy. "The number of events and dollars involved in off-premises crime have dropped dramatically post 9/11,” he said. Three reasons he cited were:

"The dollar value of on-premises crimes has gone down due to the change in the mix of crimes,” added Kennedy. “Fewer high-dollar robberies and safe burglaries, and more grab-and-runs and three-minute burglaries. Some of the other issues mentioned above are also relevant here: more attention and arrests of serious criminals and gangs who commit high dollar crimes; more information sharing on serious crimes which helps the investigations."

Notably, jewelers in both northern New Jersey and, last weekend, Nashvhille, TN, have been victims of overnight burglaries. A dozen such incidents occurred in northern New Jersey between February and August this year, while jeweler Cindi Earl of Nashville experienced an overnight burglary September 3. In the New Jersey incidents, JSA reports burglars cut power to surveillance cameras and alarm systems prior to smashing a window or breaking open a door in order to gain entry, and then took merchandise from showcases. The burglars at Earl’s store used a similar MO: smashed a window to gain entry, then smashed showcases to steal merchandise left inside—all of which was lower-end fashion “play” jewelry, as she describes. Her high-end goods were locked in the safe and both cases and window were repaired a day later, according to a post on Earl’s Facebook page. She termed the incident “a serious glass event (below), but nothing major other than the sweat equity, and repair money.” By the following day, the glass was repaired and Earl was ready to remerchandise. 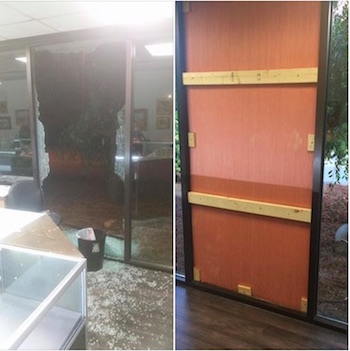 JSA recommends jewelers put away all merchandise every night, no matter what price point.

Separately, Jewelers Mutual Insurance Co. says choosing a guard for a jewelry store isn’t always the deterrent to crime that it should be. Criminals targeting jewelers have become desensitized to the presence of unarmed guards and guards who are not police officers. While a guard’s presence can help mitigate theft, says JM, as the above statistics show, smash-and-grab robberies are the primary concern for jewelers today. During some of those crimes, robbers have actually overpowered and injured guards in the stores.

If using hiring a police officer is not an option, private security guard services can still be an effective alternative, says JM. While you can trust the credentials of law enforcement, basic requirements for security guards vary by state. By selecting a reputable security guard service, you can trust that the guards you work with are certified and licensed by the state and comply with necessary requirements. These are some specific skills that are also recommended:

Even with these additional measures, some particularly brazen criminals may view an armed guard as a challenge to escalate the situation, which is why having one with proper training is worth the investment.