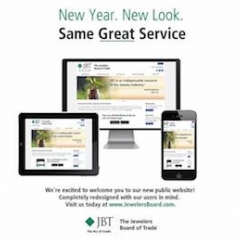 Warwick, RI—The Jewelers Board of Trade has enhanced its public website, www.jewelersboard.com, improving the ability for retailers to submit a list of suppliers and non-members applying for membership.

JBT acting president Richard Weisenfeld said, “Jewelry industry companies are pressed for time and need to quickly provide JBT with information on suppliers, (expediting the rating update process) and companies applying for membership to quickly and easily utilize our services.”

In addition, retailers can also apply for JBT’s credit monitoring service RatingWatch via the updated site.

Akron, OH—After a year of management upheaval, a scathing sexual harassment scandal, and faltering sales, Sterling Jewelers finally caught a small break: a federal judge last week reduced the number of individuals in a class-action gender discrimination lawsuit against the retailer from 70,000 to 250, saying that an arbitrator overstepped her bounds in ruling that merely being female was sufficient grounds for inclusion in the lawsuit pending against Sterling Jewelers for almost a decade.

Three years ago, in February 2015, arbitrator Kathleen A. Roberts had ruled that the nearly 70,000 women who worked for the retailer within a specific time frame could pursue discrimination claims as a class even if they had not specifically wanted to be part of the case. It’s not uncommon for a class action suit to include individuals that don’t opt in, but in this case the issue was whether an arbitrator has the power to go ahead and include them.

Sterling appealed the decision twice and in July 2017, the U.S. Second Circuit Court of Appeals said that the arbitrator issue had never been squarely addressed and remanded the case to U.S. District Court in Manhattan. On January 16, federal judge Jed S. Rakoff ruled that an arbitrator does not have this power.

The class for this specific case now includes only the 250 plaintiffs who are actively pressing discrimination claims—but at least 10,000 women opted into a separate class against the jeweler in 2016, with claims under the Equal Pay Act. That case is still pending.

Vicenza, Italy—One sector of the jewelry industry could come to be recognized as a beacon of sustainability and positive environmentalism: the cultured pearl industry. This was the message of a seminar co-organized by CIBJO and the Italian Exhibition Group (IEG), on January 22 at the VICENZAORO January show in Vicenza, Italy.

Titled "Green and Blue Jewellery, Environmentally Sustainable Luxury," the seminar focused on the marine ecosystem, where fully sustainable gem production is feasible through aquafarming, such as for cultured pearls. Precious coral was also examined.

Unlike a mine, which has a finite life span, a pearl farm can continue producing indefinitely if it is responsibly operated. A healthy oyster in a clean marine environment can produce three high-quality cultured pearls over its productive life span, with proper time between grafting and harvesting for the pearls to form.

Responsible practices are more likely to be applied when sustainable social and economic opportunities are also present, said the speakers. If pearl farming communities share only a minimal proportion of the revenues generated by their labor, they are less likely to invest in maintaining a decent marine environment and will be more inclined to maximize production by reducing the gestation period of the pearl in the oyster. But those that share equally in the profits are more likely to take a long-term view and invest in proper environmental maintenance and care of the oysters, said Dr. Laurent Cartier, a pearl and gemstone specialist at the Swiss Gemmological Institute in Basel, Switzerland, and one of the world's preeminent experts in sustainability in the sector.

“There is a unique synergy between pearl quality and ocean health, with profits and conservation being closely linked. Not only does pearl farming offer economic development opportunities to remote communities, it also has the potential to be a sustainable luxury product, and a great medium to engage with and educate consumers,” he said.

Shigeru Akamatsu, senior researcher at the Mikimoto Pearl Research Laboratory in Japan, described Mikimoto's "zero emissions pearl farming" policy, which eliminates the release of industrial waste into nature during the pearl farming process, in part by ensuring that practically all elements of the are oyster are productively utilized. 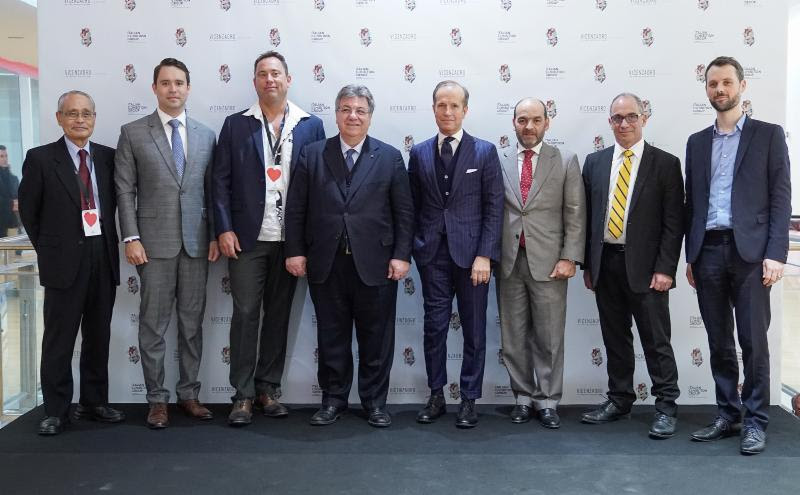 The tropical reefs in which much of world's pearl farms operate cover less than one half of 1% percent of the earth's surface area, but contain the largest concentration of biodiversity on the planet, explained Justin Hunter, founder and CEO of J. Hunter Pearls in Fiji and President of the Fiji Pearl Association. Over the past several years, he has been working together with the government of Fiji to establish a private/public partnership to create viable economic and employment opportunities within rural communities of the island nation, while at the same time developing means of countering the effects of climate change. The pearl-bearing oyster is a filter feeder by nature, often referred to as an "indicator species," Hunter explained. Any decline in water quality has a direct impact on oyster health.

Pearl farming is as much as about knowing the technique of operating on an oyster as it is about preserving nature and nurturing people, said Jacques Christophe Branellec, deputy CEO and executive vice president of Jewelmer, a Philippines-based international luxury brand cultivating South Sea pearls. "We are not in the life of a business," he stated. "We are in the business of life."

The presentations delivered at the seminar will shortly be made available on the CIBJO website.

Next article:
The Centurion Video Series: How To Take A Fresh Look At Your Website