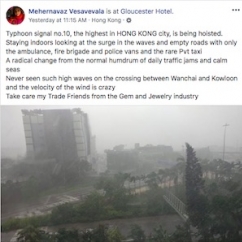 Hong Kong—Super Typhoon Mangkhut roared into Hong Kong at a level 10—the highest on the scale of Pacific storm strength, roughly equivalent to a Category 5 Atlantic hurricane—forcing the annual Hong Kong Gem & Jewellery Show to close for the duration. Exhibits at the AsiaWorld Expo—due to end Sunday—closed one day early, while those at the Convention and Exhibition Centre closed Sunday but reopened Monday until the official end of the show on Tuesday. Left: Mehernavaz Vesavavela, a longtime industry media representative, shares the view from her hotel room.

The storm blew off roofs, blew out windows, uprooted trees, and sent water rushing into buildings, but the island managed to avoid the level of devastation experienced earlier in the Philippines. Members of the jewelry industry waited out the storm in their hotels, often posting images of the swaying buildings on social media. At press time there were no reports of injuries to anyone in the jewelry industry. 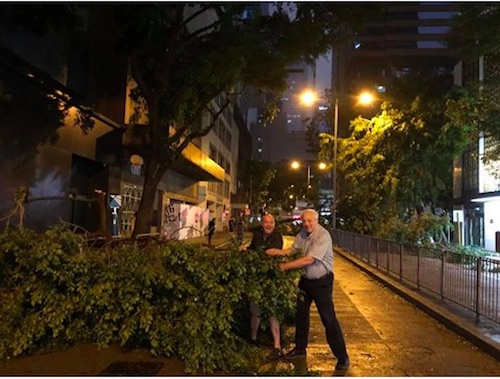 After the storm: Russell Shor, senior industry analyst at GIA, and Ed Johnson of the Responsible Jewellery Council pose with a downed tree on Hennessy Road in Hong Kong.

SYNTHdetect XL has a larger base unit that allows multiple volumes of jewelry to be screened simultaneously, and also provides the opportunity to now scan larger necklaces, multiple solitaire rings, and multiple bracelets, while retaining the ease of use of the original device.

IIDGR president Jonathan Kendall said, “Using the same revolutionary technology as the original SYNTHdetect, this new device allows more pieces of jewelry to be screened at a faster rate than ever before. SYNTHdetect XL will be another valuable tool for the trade, building on the strong positive feedback we’ve received since launching the first SYNTHdetect last year.”

If a stone in a piece of jewelry does not display the attributes of a natural diamond, it is highlighted immediately and with a high degree of accuracy, with the lowest referral rate of any device in the industry, says Jamie Clark, commercial director.

Separately, De Beers Canada has acquired all of the outstanding securities of Peregrine Diamonds Ltd (“Peregrine”) at a purchase price of Canadian $0.24 per share, for a total cash consideration of C$107 million. The acquisition includes the high quality Chidliak diamond resource located in Canada’s Nunavut Territory and other properties elsewhere in Nunavut and the Northwest Territories.

The transaction was announced in July, approved by Peregrine shareholders August 31 and by the Supreme Court of British Columbia on September 10. The common shares of Peregrine were delisted from the Toronto Stock Exchange September 14.

Bruce Cleaver, CEO, De Beers Group, said: “We are very pleased to complete the addition of the Chidliak resource to De Beers Group’s world-leading diamond resource portfolio, and to extend our presence in Canada. We look forward to developing the resource further and are excited about its potential for contributing to our future diamond production.”

Kim Truter, CEO of De Beers Canada added, “We are very excited about the Chidliak cluster, an asset with very strong development potential. Having built and operated three diamond mines in Arctic-like conditions in the past 15 years, our expertise in bringing projects of this nature to fruition is unparalleled. We look forward to accelerating our understanding of this property and how we can move it forward.”

Hong Kong—With the implementation of a wide scope of tariffs on goods imported to the United States from China, the Office of the US Trade Representative (USTR) issued a notice outlining the details of the application process for non-US importers, exporters, traders, and trade associations to request that particular products classified within one of the affected tariff subheadings should be excluded from the additional tariffs. Unlike the process for requesting exemptions on the steel and aluminum tariffs, the USTR allows for product-specific, rather than petitioner-specific, exemption. Such exemptions will be granted to parties importing under the same tariff subheading, provided they meet the requirements.

The Hong Kong Trade Development Council has written up guidelines to apply for such exemptions. Click here to read the full guidelines and also refer to the chart below. 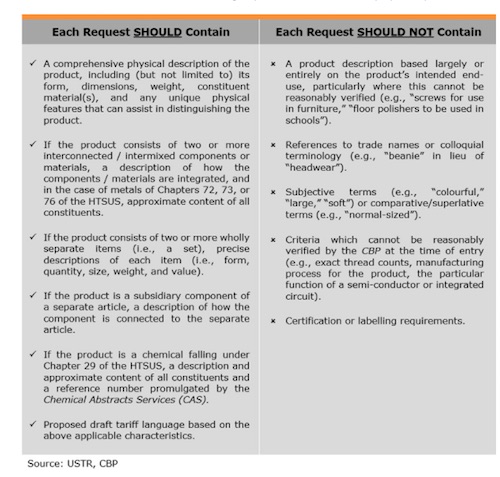 Hong Kong—Russian diamond miner ALROSA presented the first-of-its-kind collection of large colored diamonds at the Hong Kong Jewelry & Gem Fair last weekend. The collection is a stepping stone of a new strategy to become the world leader in the production of colored polished diamonds.

"ALROSA’s polished branch now focuses on the processing and sales of large and colored diamonds. We are the world's largest producer of diamonds, and that gives reason to believe that we are also ahead in terms of colored rough diamond production, and we have what it takes to dominate the market for colored diamonds,” said Evgeny Agureev, director of the United Selling Organization of ALROSA. The minerproduces at least 7,000 carats of colored diamonds per year.

The collection launched in Hong Kong featured 250 diamonds of different shapes and hues, and it will go up for auction on September 19. The key stones of the collection, which are expected to be the most expensive lots, include a 11-carat fancy vivid yellow, an orange-yellow oval diamond of over 15 carats, and a 11-carat deep purple-pink cushion, the largest of that color ever to be graded at GIA.

Colored diamonds are found in all ALROSA deposits, but two areas with the greatest reserves are the alluvial mines of JSC "Anabar Diamonds" in Yakutia, and the open pit of PJSC "Severalmaz" in the Arkhangelsk region.

ALROSA has begun sorting colored diamonds according to a new technology that includes almost all hues and colour grades. Most of these diamonds are processed by DIAMONDS ALROSA, the company's in-house lapidary division.

"One of the ALROSA’s competitive edges is the in-house lapidary division, which gives us the opportunity to trace the history of each diamond from mine to market. Our diamonds enjoy a sterling reputation and comply with the highest ethical and environmental standards.We invest in our diamond cutters, providing extensive training and opportunities for professional development. This allows us to keep the tradition of the highest quality of gem cutting, the paragon of diamond cutting art also known as the ‘Russian cut,’" said Agureev.