New York, NY—When it took effect in 2003, the Kimberley Process was widely hailed for its role in stopping the flow of conflict diamonds. But in the ensuing years, the narrow scope of the agreement has sparked considerable criticism among both industry and non-industry human rights advocates. The KP was originally designed to stanch the flow of diamonds being used to fund armed rebel groups trying to overthrow governments, but it didn’t stop legitimate—albeit unethical—government officials from using diamonds to further their own quests for power and control.

The World Diamond Council and other organizations have long advocated expanding the scope of the Kimberley Process to include issues related to human rights and labor relations. At the sixth Forum of the Africa-Belgium Business Week, meeting last week in the Belgian town of Genval, Marie-Chantal Kaninda (left), executive director of WDC, said such an expansion would help create conditions in which Sub-Saharan Africa's artisanal diamond miners can meet their economic potential, and so support the development of their countries' economies.

Referencing the peace agreement signed in February by the CAR (Central African Republic) government and 14 rebel groups, aimed at ending the country's seven year-long civil war, Kaninda said the WDC is optimistic that the end of the conflict will precipitate better prospects for the African nation.

"We believe that through the implementation of the peace process, the CAR will be able to resume the unrestricted export of rough diamonds, supported by the Kimberley Process Certification System, and, paraphrasing the president, help turn the CAR resolutely towards its development," she said.

Although the CAR remains under Kimberley Process suspension, forbidding diamond exports from areas falling outside of the so-called green zones in the western part of the country from which diamond exports are approved monthly by a monitoring team, its government has been working closely with the Kimberley Process to enable the sale of artisanally-mined alluvial stones.

Improving the lives of artisanal diamond miners—as well as other workers in the diamond mining industry and other key sectors like agriculture and forestry—is a central focus for human rights advocates. So doing will have a positive impact on the communities that they support, Kaninda said, as well as other sectors of the economy and the country in general.

"These are the developments that we would like the Kimberley Process to support, through the expansion of its scope," she noted. "When we talk about this great and beautiful continent [of Africa], we still talk too often about violence, lack of democracy, poverty, and corruption. These are evils and words that we would like to feel or hear no longer.

"When we talk about Africa we still refer too often to developmental aid. Yet we all know that real development comes through education, work, and direct investment. It is time for Sub-Saharan Africa to rise up and develop all its human, mining, agricultural, and energy potential, to escape from its state of under-development and enter a new era." To download the English translation of Kaninda’s speech, click here. 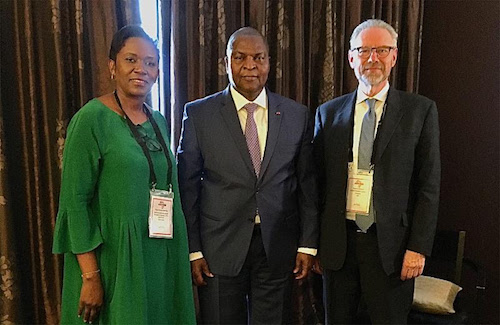 From left: Marie-Chantal Kaninda, executive director of the World Diamond Council, with Faustin Archange Touadera (center), president of the Central African Republic, and Stephane Fischler (right), WDC president, during the 6th Forum of the Africa-Belgium Business Week in Genval, Belgium.

New York, NY—The Silver Promotion Service (SPS) has introduced a new designation for selected participants in its Savor Silver program: “International Designer of Distinction.” These brands will be shown as a new category on www.savorsilver.com. Five participants in the pilot program are from China: iRiffle, Jass Look, Monster Area, Shang Mo, and Su Live; Two are from the U.K.: Dower & Hall, and PK.

SPS director Michael Barlerin said, “A primary criteria for being selected for Savor Silver until now was that a brand had to have a market presence in the United States. After reviewing the SPS program last year, and based on participation in various international trade shows, it was obvious that there were multiple international brands that met the SPS’s silver jewelry design criteria, and would benefit in their respective markets by becoming part of Savor Silver even though they did not operate in the United States.”

In addition to being represented on the website and acknowledged in press releases, the chosen brands will be able to utilize the Silver Mark in their respective markets, said Barlerin. The new IDOD participants join a group of nine designers from Mexico who originally were identified as “Designer of Distinction – Mexico.”

“It is our intent to continue to expand the countries and brands represented in this category of the Savor Silver Program throughout the year,” said Barlerin.

Moscow, Russia—ALROSA, the world's largest diamond mining company, and the Angolan national company Endiama have signed a Memorandum of Understanding aimed at strengthening economic, scientific, and technological cooperation between the two diamond companies. It also identifies areas of mutual interest to develop diamond production in Angola, guided by the best practices of corporate social responsibility, sustainable development, and transparency, putting an emphasis on the search and exploration of new economically attractive deposits. The parties also intend to cooperate in the development of global industry self-regulation mechanisms and building up responsible diamond supply chains in support of the Kimberley process, to support industry-wide initiatives aimed at promoting diamond products in key markets to ensure the sustainable development of the diamond industry in two countries. The document also provides for promotion of technologies and knowledge transfer in mining and other activities, as well as cooperation on mechanisms in diamond sales.

Sergey Ivanov, Alrosa CEO, and Jose Ganga Jr., chairman of the administrative council of Endiama, signed the document in the presence of Russian Federation president Vladimir Putin and João Lourenço president of the Republic of Angola.

"For both Russia and Angola, the diamond industry is an important part of national life. This is not only about the place on the international arena or funding the budgets, but also jobs for people and dozens of social projects implemented for them. Of course, we welcome the signing of the Memorandum with the national company of Angola, and are pleased to seal our long-term cooperation with an official document proclaiming the joint desire to develop our common initiatives," said Ivanov.

The two companies are co-founders of Catoca, Angola's largest diamond mining company, which annually produces and sells about 6.8 million carats of diamonds. Its reserves are estimated at 120 million carats. In addition, ALROSA and Endiama have been conducting exploration in Angola as part of a joint venture since 2014.