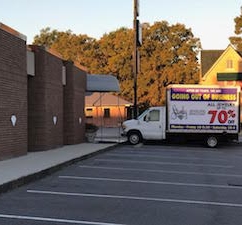 North Little Rock, AR—The news was shocking to local residents: Stanley Jewelers Gemologists, Inc., the local fine jeweler and a mainstay in the town, was calling it quits after 80 years in business.

Phone calls started coming in (was this a joke?), some very nice letters arrived, and even a cake with a sad face (see photo montage below) was delivered. The parade of communication continues even now. It wasn't just locals, either--Stanley customers across the country who received the sale notice called as well.

The decision to close a solid business was not an easy one for either Loyd Stanley or his daughter Laura Stanley. The two have been at Stanley’s helm along with a staff of five to six. The decision was not a financial necessity--business is good and continued to be strong even in these challenging times--but it was time for a change. Loyd Stanley was ready to retire and Laura Stanley was looking to pursue retail jewelry in her own way, as a private jeweler. After much thought and deliberation, a going-out-of-business (GOB) sale was the best option.

Stanley’s partnered with Wilkerson, also an Arkansas and national institution for the GOB sale. It began on October 18 with a special evening event for preferred customers and the invited list grew after that, eventually encompassing the entire state through the stickers on the statewide newspaper (see photo montage below).

I grew up in the store. Loyd is my father and Laura is my sister. I counted change with my grandfather as a youngster, working part-time beginning at age 14, then working full time for a decade after college. I left to pursue other industry interests after that, realizing that while the jewelry industry was my path, traditional retail was not. Last week, it was my bittersweet pleasure to go back to work the beginning of the GOB sale. It was truly an experience. 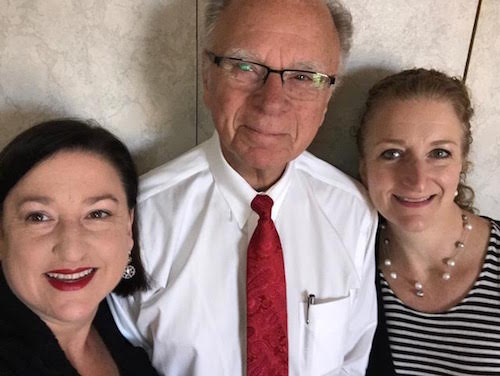 First, the traffic was amazing. (Timed shots below of the first full day.) It was like a great pre-Christmas rush of my memories, except it did not stop. Those staffers who got to eat lunch did so standing up, quickly, and back to the sales floor. The second day was just as strong, which was better than expected. And it’s hardly let up since. The sale will continue through the end of the year.

All hands were on deck. I was there for four days. Loyd’s wife Kaye was there to help behind the counter and two employees from Wilkerson were on hand (plus a third for the first month). It was still amazing busy even with all the extra help. Never before has the sales floor needed 12 people – ALL DAY LONG.

It was weird to discount jewelry. Stanley Jewelers Gemologist, an 80-year old, American Gem Society business was one that sold jewelry at full price. There was one sale in my lifetime. Now, with the GOB sale, the percentage off varied from case to case, ranging from 15% to 60%, plus another 10% for the first few days. The tactics worked.

Customers bought more than one piece. Some bought many, many more. “I didn’t believe it when they told me I needed new sales tickets that would hold more than five pieces,” said Loyd Stanley, of his prep for the sale. He continued to be amazed that people would buy in bulk.

Customer types began to emerge. There were those that had never shopped anywhere else and wanted to keep the Stanley tradition going in their gift-giving, at least for a while. One lady usually received three items a year from Stanley’s. With the GOB and the sale, she took home all of next year’s items in one fell swoop. Also, there were a lot of daughters getting really great Christmas presents from their Moms (and Dads, too). Some of it was going into the safety deposit box for a future time. Everyone began to think ahead.

Then there were the super sale shoppers. A few tried to offer less than marked (nope, but thanks) and one lady was miffed that the entire store wasn’t at least 70% off. Happily, those shoppers were a very small minority and didn’t stay long. 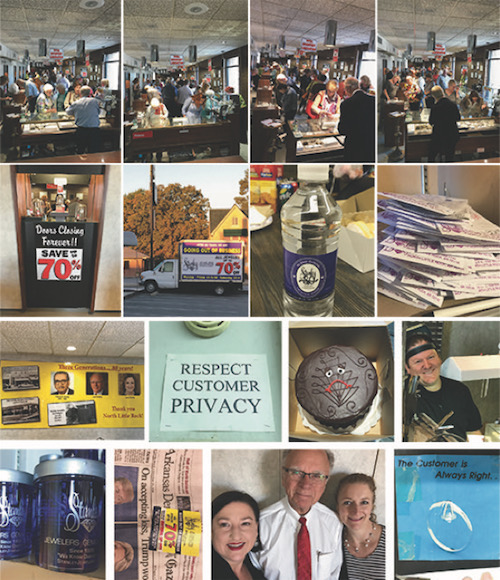 Scenes from a sale: Stanley Jewelers' customers couldn't believe it when they were told the store is closing. Sales tickets piled up higher and higher, and customers also snapped up souvenirs like water bottles and jewelry cleaner. One customer even baked a "sad face" cake, fourth row, third image from left.

It was a frenzy. At some point, actual budgets ceased to matter for most customers. Part of it was atmosphere, part of it was that Stanley’s usual customer did know that these were great deals and they took advantage and made it work. “I was amazed that some of the strangest pieces of estate jewelry were leaving to new homes,” said Laura Stanley. “Some of them had been here for years.”

The store stayed open until the traffic almost ceased each day. The first few days it was hours after closing, then the times were a bit more normal. It took additional time for the cases to be set up each day because no one had time to do that while selling. We all worked early and late and while I've since gone back home to my regular work, they are still in that mode.

It’s a science. The whole GOB process is made up of steps that have been tried and tested and that work. Sharon Wilson, Ken Tooman and Jeff Bagdasarian (first month only) are the representatives from Wilkerson that were there to run the sale, provide support and to sell. And sell they did. They knew which days would be the busiest and what to expect and when.

I believe one reason the sale is going so well is the strength of Stanley’s reputation and how the store operated in the community for 80 years. The sale was far ahead of estimates when I left, and I expect that will continue.

It’s good to know that my retail skills have not atrophied. While I had to ask questions from time to time, I did sell a good amount of jewelry. In fact, there are two more upcoming times that are expected to be extra busy. My presence has been requested for however many days I can manage during those periods. Strangely, I’m looking forward to going back, making more sales, seeing old friends, and being really tired. And a bit sad. For the community and my family, it’s the end of an era.

When I look back at the store’s history, what strikes me most is that my grandfather and my dad kept a staff employed for all these years. There were ups and down and I was there for my share. Yet payroll was paid and the store went on. The employees there now who want to continue to work will find jobs with amazing recommendations and whatever help is needed from Loyd and Laura. It was a wonderful place to work and both employees and employer were appreciated.

The Stanley’s jewelry tradition will continue with Laura, and with me too, as well as our brother Stephen who has worked on and off at the store throughout the years. We all learned how to treat customers, how to problem solve, and how to sell, thanks to our time at the store. We work with integrity and treat others as we would like to be treated. Stanley's is where we grew up, and we take that with us wherever we go.