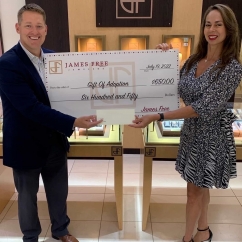 Montgomery, OH--James Free Jewelers marked the beginning of August with a show of support on their social media.

"We are thrilled to support such an amazing organization," the store wrote in a Facebook post. "Thank you for all that you do, Gift of Adoption!"

"At James Free Jewelers, there’s never a charge for a simple watch battery replacement," the post added. "Instead, we kindly ask for a donation of any amount, of which 100% of the funds collected go to benefit our partnering charity."

The store has a watch battery program which it says is a way to "give back to our community."

Acknowledging its privilege to "pay it forward," James Free Jewelers says on its website that its Watch Battery Charity Program has The Foodbank as its partner. Often called the Dayton Foodbank, the charity was founded in 1976 with a mission to alleviate hunger through its wide network of partners by acquiring and distributing food across Montgomery, Greene, and Preble counties of Ohio.

Learn more about the store's charity partnership programs on this page.