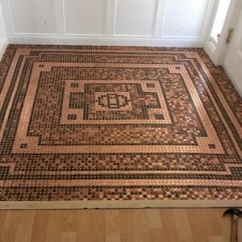 Pasadena, CA—Anyone who watches HGTV regularly is familiar with the term “penny tile.” The term refers to small ceramic tiles that remind one of coins--not usually one that actually is made of coins. Image: MyModernMet.com

But jeweler Kelly Graham, owner of Camias Jewelry Designs, took the idea quite literally. Obviously used to working with metal, the jeweler took roughly 7,500 pennies of varying shades and created a mosaic on her floor. The space, approximately six feet by six feet, took Graham three weeks to complete. My Modern Met featured her handiwork in a recent article.

Originally a machinist before becoming a jeweler, Graham began the project by separating the pennies into piles by color—bright shiny new, deep dark old, and everything in between. She created the pattern largely as she went along and set the coins with caulking, then grout, and topped it with a resin coating on top.

My Modern Met reports that although Graham actually finished the project five years ago, it’s still beautiful and has held up well.

Next article:
Accutron Becomes A Brand In Its Own Right