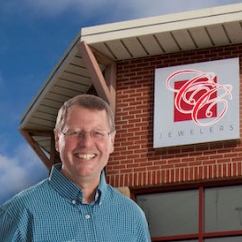 Traverse City, MI—It has all the makings of a family drama: a jeweler ready to retire plans to sell his business to an employee. Meanwhile, his son is secretly planning to propose to the same employee. Image: Retiring jeweler Dave Croad.

No, it’s not a soap opera plot, and luckily all parties are very happy about the outcome. And an article in the Traverse City Record-Eagle documented the entire thing with a feature article about the jewelry store.

It all started with jeweler Dave Croad, the owner of CC Jewelers in Traverse City, MI. The 65-year-old Croad is ready to hang up his loupe after 40 years in business, and enjoy the life of a snowbird. He told the Record-Eagle that both the changes in the industry with the Internet, coupled with the fact that he was now selling engagement rings to the children of couples he’d sold engagement rings to years ago, were driving forces behind his decision to retire. Unlike many retail jewelers who end up closing a beloved store, he’s one of the lucky ones with a ready buyer for the business.

Croad began his jewelry career in 1979 at the former Fox Jewelers in Traverse City. CC Jewelers, meanwhile, began its existence as Coins & Collectibles, and Croad purchased the business in 1993. He added jewelry in 2005, changed the store name to CC Jewelers, and sold the coin and collectible part of the business two years ago.

He’s selling the jewelry store to store staffer Nicolina Gardner, who just happens to be the fiancée of his son, Michael Croad. The two became engaged after Gardner jokingly texted the younger Croad a photo of a ring that had just come in. Michael Croad told his father to put it aside. Despite the entire staff being in on the surprise, nobody leaked the secret, and Gardner had no idea she was about to get the ring of her dreams.

Gardner will fully own the store before the couple’s planned nuptials in May 2022, says the Record-Eagle. She will continue the store’s longstanding tradition of an extensive bridal jewelry selection, but plans to add more designer, fashion, and men’s jewelry.