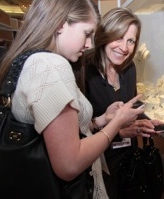 Tucson, AZ—Centurion awarded four prizes to retailers totalling $15,000 this year as part of its introduction of an interactive game played on smart phones and texting-capable cell phones.

The game was called the Centurion Dash for Cash and the platform and game execution was sponsored by SCVNGR, whose Diamond Dash program—run by jewelers in their communities via participants' smart phones and cell phones—has been a tremendous success for many stores who’ve run the promotion.

Prestige jewelers played the Centurion Dash For Cash at Centurion 2011. Exhibitors and Sponsors were given special “answer cards” to place in their salon windows and on their exhibit tables, which added attention to their exhibits. Retailers were required to answer as many of the questions as possible to win maximum points. 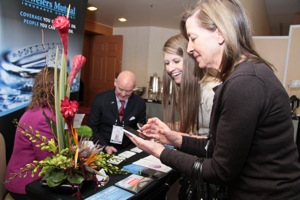 Here, retailers Eva (foreground, right) and Eva Michelle Greene (foreground, left) check their mobile phones for clues in the Centurion Dash For Cash game; above, they check out one of the salon windows for answer cards there.

The highest number of correct responses was the winner, receiving $5,000 in merchandise purchasing credits toward Centurion jewelry show purchases (Centurion pays the retailer's choice of exhibitor up to the prize amount based on invoice). The second highest received $3,000, and third-place received $2,000. Additionally, one special Saturday night winner received $5,000 in cash, to do with as he or she wished.