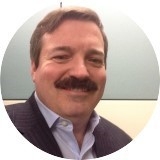 New York, NY—Like everything else in the industry since the coronavirus pandemic began, the Jewelers Security Alliance’s annual luncheon and awards ceremony was moved online this year. In a virtual event held Wednesday, JSA president John Kennedy welcomed industry members from across the country via Zoom to celebrate JSA’s 138th year of crime prevention efforts in the industry and present the 22nd Annual James B. White Award to law enforcement. Image: Joe Bernard, director of stores for Bernie Robbins Jewelers and recipient of JSA's Industry Service Award.

“This year also needs to have moment of silence for the event that has overpowered us. 358,000 [have died] in the United States and 1.8 million worldwide [from COVID-19], and yesterday was the highest day of deaths in the USA, 3800. This terrible tragedy that has overshadowed our industry has brought sadness to so many,” he said.

He also read the names of the three victims in the jewelry industry who were killed in the course of the prior year: Mark Vuono, 69, a jeweler from Fairfield County, CT, killed in his store in Mach; Eshagh Natanzadeh, 62, of Beverly Hills, CA, stabbed to death in his Los Angeles jewelry store in November, and David Dorn, 77, a retired police captain in St. Louis, MO, who was killed while protecting a friend’s jewelry and pawn shop during the George Floyd riots in June.

“This is serious business. The things JSA talks about are not theoretical. They cut close to home. I live in Fairfield County,” said Kennedy, pointing out that Vuono’s death was the fourth jeweler to be killed in the county in the past 15 years.

Kennedy next thanked his staff, board, and especially JSA chair Steve Kaiser, especially for his ability to continue raising needed funds during a challenging year. “Steve has a remarkable talent for making sure JSA has the resources to do its job,” said Kennedy.

“Security is the easiest product to sell,” replied Kaiser. “How do we have an industry without security?

“Sharing information is what starts the process of getting people arrested,” said Kennedy.

Romo said the first time he attended the JSA’s annual conference, he didn’t know what to expect, and admitted that agents sometimes attended these conferences just to check off a box, but once he was there he was amazed at the passion of the JSA, and eager to partner with it.

“Our partnership with JSA has grown and we’re only phone call away. And thank you to the jewelry industry for supporting law enforcement through these dark days. Whether our resources are cut or COVID is still around, we’re still ready to protect the jewelry industry,” he said.

Dennis Bopp, a multi-decade veteran of the Los Angeles Police Department, has been with the task force nine years.

“One of my partners received the award in the past, and also Frank Amaro, who retired from the FBI, and I am honored to be in their company. I recognize the importance of it. We pay attention to everything in the country from Miami to New York to LA. Bad guys travel nationwide,” he said, noting especially a new threat from Chilean burglary gangs. “I appreciate your support. We don’t always hear a lot of it these days, and it’s important to hear it.” He also acknowledged his family, who supports him when he needs to go out at 2 a.m. on a call.

Kennedy also reiterated that when he spoke to both men’s supervisors, they said it was particularly nice to be appreciated at a time when not a lot of people are honoring law enforcement.

“Without the support and intervention of law enforcement, our industry would be in a very bad way,” said Kennedy.

JSA’s 16th Annual Industry Service Award was presented to Joe Bernard (pictured top of page), director of stores for Bernie Robbins Jewelers, a five-store chain in New Jersey and suburban Philadelphia, PA. The Industry Service Award is presented annually to someone in industry but not in law enforcement, in recognition of their efforts to help make the industry safer overall.

Bernard set up and runs a network of high-end AGS/Rolex dealer jewelry stores that share information on suspects, crimes, casings, and so forth. They provide education to each other on security matters for that type of store, said Kennedy, explaining there have been many instances where that information prevented crimes and resulted in arrests. One such area has been in the credit card world, where the sharing of information between such stores can prevent someone from doing hundreds of fraudulent purchases.

Kennedy also acknowledged Bernard as someone he turns to for advice on retail security practices. “I’m a lawyer. not a retailer, and he’s in the trenches and a wise counselor on what people are doing and how they’re doing and it and how to make it better.”

Harvey Rovinsky, owner of the Bernie Robbins chain, complemented his director of stores. “This is an extremely well deserved honor Joe has earned. He started as a bench jeweler mechanic for a summer job 30 years ago and he’s still here. We’re grateful for that. He’s done enormous things to help keep our company safer. Insurance companies come to us to look at what we do, and they learn from things Joe has instituted in our company and go do it for other clients.”

“I’ve been a victim of jewelry crimes and a witness of jewelry crimes. Solving crimes gives closure to the victims. That’s a big part of what happens when so many people work together and share information and get these bad guys off the streets,” said Bernard. He also acknowledged the efforts of Rolex, Fink’s Jewelers, London Jewelers, and Reeds Jewelers as part of the network contributing to his efforts and the honor.