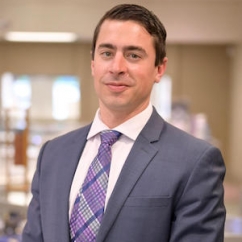 Waterville, ME—Joseph Corey has been promoted to president of Day’s Jewelers, the eight-store chain founded in Portland, ME, in 1914.

Day’s was founded by Captain Harry Davidson, whose ill health forced him to abandon a life at sea. The first Day's was a small pawn shop/auction center located in the Old Port District of Portland. Davidson’s three sons, Sidney, David and Herman joined him in the business and the three brothers opened 21 Day's stores throughout northern New England over the next 30 years.

In 1988, Sidney and David Davidson, the remaining owners, retired and sold the business to Jeff, James, and Kathy Corey, and Mark Ford. The families had history together: Jeff and Jim Corey’s father, Robert, had started working at as a stock boy at Day's in Portland when he was just 11 years old. He eventually became the manager of the Day's Jewelers store in Caribou, Maine, but in 1955, with his wife Enid struck out on his own, opening Robert's Jewelry in Madawaska, ME.

Joseph Corey, Jeff and Kathy’s son, is the third generation of Coreys in the business. He began working at Day's South Portland store in the jewelry service department. In 2009, he enrolled into Day's management training program and three years later became manager of the Manchester, NH store. In 2017, he became vice president of store operations, responsible for oversight of all Day's locations. With his promotion to president, he succeeds Jeff Corey, who remains as co-owner and vice president of marketing.

From The Telegraph, Nashua, NH:

"Joe's career in the jewelry business really began when he was 5," said his father, Jeff Corey, co-owner and VP of marketing at Day's. "As a young boy, he loved to travel to the stores by my side. I taught him how to metal engrave at 6. He has a keen understanding of every aspect of the jewelry business. I'm exceptionally proud of how Joe guided our stores through the COVID pandemic without ever losing sight of Day's commitment to outstanding customer care. "

Corey's mother, Kathy, co-owner and VP of merchandising at Day's adds, "Joe is the perfect person to lead our company. Not only has he proven to be an astute businessman, but Joe has a deep respect for people. People, whether it be customers or employees, are at the core of Day's culture."

Joseph earned his Bachelor of Science degree in business administration from Southern New Hampshire University. He currently resides in Scarborough, Maine, with his wife, Sarah Beth, and sons, Cameron and Owen. He is an avid sports enthusiast and enjoys skiing, snowmobiling, ocean sailing and golf. Corey serves on the board of advisors for JCK Las Vegas, the largest jewelry trade show in the country.”

Day’s, an AGS jeweler, has become an industry leader in social responsibility and philanthropy. The company is a member of the Responsible Jewellery Council, has a partnership with Diamonds Do Good, has raised $100,000 for Jewelers For Children, supports the Diamond Development Initiative, and created its own Diamonds For Peace program, designed to help those in need locally and around the world. Through the program, Day’s pledged that for each loose diamond or piece of diamond jewelry sold, $10 will be donated to organizations that make the world healthier, stronger, more accepting, smarter, and safer. To date, 38 organizations, ranging from industry charities to local to national or international groups, have benefited.

Next article:
Did You Miss Sales Strategy for April 9, 2021?