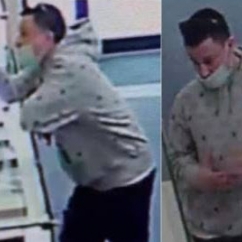 New York, NY—Two male suspects in Sioux Falls, SD shopping together got what they wanted—for free. The Jewelers Security Alliance says the suspects pictured walked into a jewelry store looking for a birthday present for the wife of one of them. The second male walked around the store, waited for the right moment, and reached around the counter and took jewelry merchandise. Image: One of the suspects in the counter theft.

Related: Note To Jewelers: Don’t Leave The Keys Out!

It was the second retail theft last week, says JSA. In Hampton Roads, VA, a suspect who described himself as a merchant seaman just off his boat entered a jewelry store ostensibly looking for a heavy Cuban link gold chain. The suspect wore sunglasses until the sales associate asked him to remove them, which he did, says JSA, but he still walked out with the chain without payment. He is described as mid 30s, 6 feet and 4 inches, and 200 lbs, below: 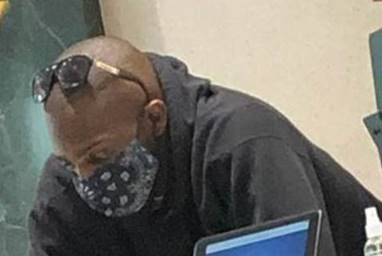 Finally, a third jewelry store in Georgia has been burglarized in three weeks. Suspects in the Atlanta area cut the power to a jewelry store on May 2 and came back in the early hours of May 3 with a jackhammer, cement saw, and acetylene torch. Two suspects climbed on the roof and cut a hole in the ceiling. Once inside they disabled the alarm, cut phone lines and disabled the camera system, then used the equipment to gain entry to the safe and steal of high end jewelry.