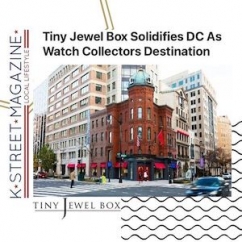 Washington, DC—Tiny Jewel Box, the anything-but-small jewelry store that’s been a go-to for generations of U.S. presidents and other VIPs, was recently written up in K Street Magazine’s Local Lifestyle section. Image: K Street Magazine's article about Tiny Jewel Box. Already a leading destination of luxury timepieces, the 12,500+ square foot Tiny Jewel Box is expanding its space dedicated to Rolex and Patek Philippe brands, both of which will have their own street-level entrance from Connecticut Ave.

Tiny Jewel Box wasn’t always a big name in watches. The original store was, in fact, truly tiny—only 100 square feet when Monte and Roz Rosenheim founded it in 1930—and it specialized in antique jewelry. An antique watch or two might be in the mix from time to time, but the focus was antique jewelry.

When their son Jim Rosenheim took over running the store in 1971, he began expanding the product offerings. By the time he bought his parents out in 1996, designer jewelry, luxury watches, diamond bridal rings, giftware, and corporate products accounted for the lion’s share of both merchandise and revenues. Vintage jewelry was still in the mix, but no longer the central focus.

When Jim’s son, Matthew, came into the business in 1993, he saw tremendous opportunity in expanding bridal jewelry and watches. Having butted heads with his own parents about wanting to introduce new product categories, Jim took the opposite tack and told Matthew that if he thought it was a good opportunity for growth, to run with it.

It was, shall we say, a very timely call. The store has become not only a major destination for luxury watches in the Washington area, but it’s gaining a national reputation as a fine watch destination.

From the K Street Magazine article:

“This is a unique distinction for the region as there is only one other store in the United States that has a similar presence of both Rolex and Patek Philippe — in a mall in Las Vegas. So the sizeable presence for both brands is a very big deal in the world of fine watches.

The expanded Rolex environment will increase from 400 to 1,500 square feet, allowing for a diverse selection of watches as well as a dedicated Rolex concierge.

Next article:
A Big Gesture From A Big Guy: Shaquille O’Neal Pays For A Stranger’s Engagement Ring