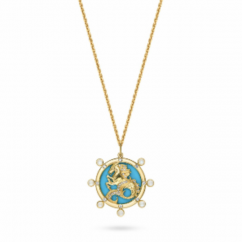 "The development of mythology and fusing of its stories to our lives is ever-evolving," said Karina Brez in a news release. "The Horsea not only continues an ancient story, but it offers a tangible connection to it. Connecting those who have a passion for the equestrian, or the ocean, to storytelling is an expansion of creativity and human nature."

"These medallions celebrate the origin story of the Horsea and are the beginning of what will be an expanding collection, where modern mythology meets equine style," Brez added in the release.

For sales or retail partnership inquiries, contact Karina Brez at 561-400-4085 or email wholesale@karinabrez.com or info@karinabrez.com.

Read more about the launch in the entire release.