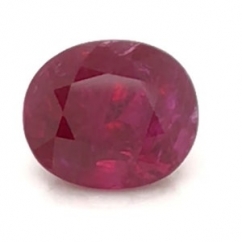 Washington, DC—Burmese rubies are back to being banned, and the U.S. government is ready to crack down on violators.

U.S. gem dealers were banned from importing rubies and other precious gems from Burma, also known as Myanmar, for nearly two decades. Sanctions were lifted in 2017, but were re-imposed again last year after the Burmese military—known as the Tatmadaw—overthrew the nation’s democratically-elected civilian government, reestablished military rule in the country, and is perpetrating human-rights abuses.

The U.S. Departments of State, the Treasury, Commerce, Labor, Homeland Security, and the Office of the U.S. Trade Representative last week issued an advisory informing businesses and individuals who do not conduct appropriate due diligence risk running afoul of U.S. anti-money-laundering laws and sanctions.

Gems and precious metals are on the shortlist of businesses the Department of Treasury is most concerned about within Burma, as a means of supplying the military with funding or materials. Also of concern are 14 categories of goods—including gems and jewelry—that have been tied to child labor and forced labor.

Gems and jewelry generate billions of dollars for Burma, and accounted for nearly half of the country’s GDP in 2015, says the report, citing the last year credible data was available. But with little oversight or transparency, the sector is rife with potential for criminal activity and human rights abuses, and these concerns have increased since the military coup.

Just because a gem’s paperwork doesn’t say Burma anywhere doesn’t mean a stone is in the clear. The Treasury Department advisory warns that Burmese rubies, sapphires, and jade have been smuggled into countries like China and Thailand to be cut and sold on the international markets as “made in Thailand” or “made in Hong Kong.” Most lab certs don’t show who’s benefiting from the sale, says the report.

“It is the responsibility of businesses and individuals to ensure their sourcing is consistent with what is being reported from vendors and suppliers to avoid potential liability for sanctions violations,” says the advisory.

Jewelers have multiple resources to help ensure they stay on the right side of the law. The Jewelers Vigilance Committee has a vast trove of information and helpful kits to help jewelers and suppliers comply with anti-money laundering laws. More information is available from the Responsible Jewellery Council, and due diligence guidance for mineral supply chains is available from the Organisation for Economic Co-operation and Development (OECD).