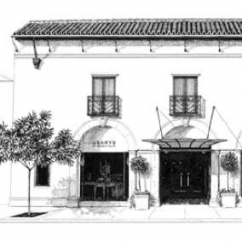 Beverly Hills, CA—If the tony shops of Rodeo Drive are any indication, luxury merchants are seeing a clear correlation between increased vaccines and increased foot traffic. In this article in the Los Angeles Business Journal, Thomas Blumenthal, owner of Gearys Beverly Hills and four luxury watch stores, said, “I’m praying that this vaccine is the answer, and it looks like it could be. Certainly, the cases in Los Angeles have gone down dramatically.” Blumenthal was one of several Beverly Hills area retailers quoted in the article, as Los Angeles is now in the least-restrictive "yellow" tier. Image: Gearys

Gearys was founded in 1930 by H.L. Geary as a small neighborhood store selling items ranging from hardware to dinnerware to the affluent consumers of the Beverly Hills area. Over time, the store began focusing on luxury and gained a reputation as a world-renowned curator of luxury and unparalleled customer service.

H.L. Geary retired in 1953 and sold the business to Fred and Ruth Meyer. It was the golden age of entertaining, and the Meyers took the store in a new direction, dropping much of the general merchandise and focusing on dinnerware and gifts. Their son, Bruce, joined in the 1970s and launched Gearys’ famous mail-order business, making its brand of luxury available worldwide.

Jewelry and watches were added to Gearys’ mix in 1997 and shortly thereafter the Meyer family sold the business to the Ross family, owners of Rhode Island-based Ross Simons, another renowned mail-order jewelry business. Tom Blumenthal, Fred and Ruth’s grandson, reacquired the business in 2003.

Blumenthal told the LABJ the investments he’s made in the store’s website over the past few years have paid off. Categories like outdoor entertainment items that can be used poolside, and luxury barware, did very well online during the 12 weeks Geary’s was closed last year during the pandemic shutdowns.

Watches, however, proved a little trickier. Geary’s owns a Patek Philippe and a Rolex boutique each on Rodeo Drive, plus two more Rolex stores, at the Westfield Century City and Santa Monica Place malls. But many luxury watchmakers—including those two brands—don’t allow online sales, so while stores were closed during lockdown Gearys watch sales were essentially halted. But Blumenthal says since then sales have rebounded nicely. From the LABJ:

“Since then, it’s been terrific,” Blumenthal said. “Our business has been very, very strong on both the watch and home side because a lot of people are redoing their homes or entertaining at home.”