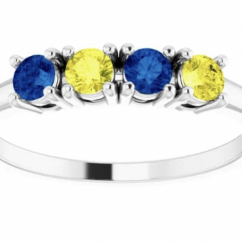 San Diego, CA--A local jewelry store located at Grossmont Center in La Mesa is donating a portion of its profits to families impacted by the humanitarian crisis in Ukraine following Russia's invasion.

According to a report by The Daily Aztec, Jewelry Loft is also donating other basic necessities and selling specially crafted jewelry — depicting the Ukrainian flag — to draw more customers towards this mission. All proceeds from the sale of these rings will go to families in Ukraine.

“The blue is for the sky and the yellow is for the wheat that Ukraine is rich in,” Ulman said in the news report.

The two items — a gold ring and a silver ring — go for $595 and $150 respectively. The rings can also be purchased on the shop's website.

“One-hundred percent of the proceeds go towards those people that are in need the most. Who have no food, who have no water, and have no electricity…most of those people are the elderly or young kids,” Ulman added.

According to the news report, the store has sold over 70 rings so far.

Read the entire news report on what further motivates this cause and how the store is garnering support for families in Ukraine.