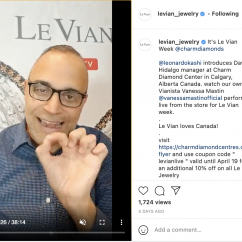 New York, NY--The statistics don’t lie! The Centurion has learned that Le Vian TV has made a positive difference to the brand’s social media engagements and views. Image Credit: Le Vian Instagram TV. The increases were in both views and engagements.

All this solid growth happened during the pandemic – when an employee and his phone had an idea that grew Le Vian’s social media customer base.

In early January 2020 Leonardo Kashi, a popular traveling salesman of 28 years at historic New York-headquartered, family-owned, celebrity jewelry brand Le Vian, told his boss he couldn't keep working for the company. He had a growing family he wanted to spend more time with and thanks to being constantly on the road, he had almost missed saying farewell to his late father. Kashi's boss, CEO Eddie LeVian said to him: "We love you. You can't leave. What shall we do?'

Some days later, charismatic, Italian-born Leonardo was at a trade show in New York. He had the idea to start filming behind the scenes and posting Le Vian jewelry, which the company says is designed for 'every woman', on the company Instagram. He suggested to his boss that instead of reaching one or two people at in-person meetings and trunk shows, he could experiment with reaching far broader audiences by using his phone to post content online.

His plan worked. Le Vian TV was born on 26 January 2020 with Leonardo Kashi as anchor presenter. Le Vian TV's genesis had nothing to do with the pandemic, but its success has been crucial in enabling the family business power through this past year.

Shows range from gemstone education to guests from the worlds of fashion, style and wellbeing and at homes with Le Vian family members. Some prime-time Le Vian TV shows have reached audiences in excess of 1m and current shows are now regularly seeing in excess of 350 live comments.

‘Le Vian TV is one of our biggest successes in the past year. It has led to increased sales and enabled us to witness first-hand enormous love for our brand as well as in particular a significant lift in sales for our platinum pieces,’ says CEO Eddie LeVian.

Italian-born presenter Leonardo Kashi - nicknamed among colleagues Leonardo diKashio - regularly receives fan mail from adoring Le Vianistas including one 2-page poem! He is pictured in the top graphic above, educating customers. Meanwhile, Le Vian TV is now central to the company's core strategy and there are plans to build a dedicated TV studio at the company's HQ in New York.

"We are obviously working hard to build on Le Vian TV's traction following its first birthday. Le Vian TV has convinced me how experimentation is crucial in business, especially in our fast-moving times. Limitations like the pandemic can engender a start-up state of mind leading to enhanced creativity. We will continue to create inspiring shows for our existing Le Vianista fans and new viewers alike," said Leonardo Kashi, Le Vian TV host.