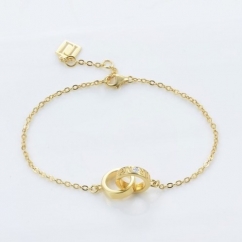 The Stronger Together bracelet was launched in New York City at a private party hosted by Leviev and the three women on June 21st. The subject of the documentary, Simon Leviev, aka Shimon Hayut, is due in court on June 28th to face criminal charges brought against him by the Leviev family.

‘Stronger Together’ bracelet shown above is sterling silver gold vermeil with .14 carats of diamonds. The bracelet is 6" (+1" +1") long and retails for $169 at www.leviev.com.

In the Netflix documentary which aired in February 2022, imposter Shimon Hayut, embarked on an international campaign of deception, pretending to be a diamond heir and member of the Leviev family, conning his victims out of millions of dollars through the Tinder app.

The jewelry collaboration was the brainchild of Chagit Leviev who reached out to the women after the documentary aired. She commented "These women were courageous enough to go on Netflix and tell the whole world how they were deceived. I felt their pain as a woman, and I wanted to reach out to them to offer our support to do something together." Leviev continues, "My wish is that this inspiring collaboration will bring this unfortunate experience to a positive closure by demonstrating women supporting women, and speaking up to bring justice against all criticism, because women are Stronger Together."

The Stronger Together bracelet was designed by the three women and features two golden rings and two natural diamonds, interlocking within each other. "Being able to come together and show that we are strong and powerful women through the collaboration has been amazing," said Fjellhoy, Elisabeths, and Charlotte. "We want to thank the real Leviev Diamond family, and specifically Chagit for bringing us all together and bringing closure to this nightmare."

For more information and to purchase the Stronger Together diamond bracelet, visit www.leviev.com. Leviev Diamonds is among the world's largest independent diamond companies.

Previous article:
From Selling Hair Products to Owning a Diamond Store: A Story of Determination